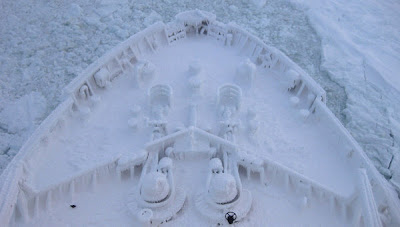 The silence from yesterday in the Okhotsk Sea crisis is now explained from the latest report, which tells us that the rescue of the Sodruzhestvo factory ship had been suspended once again. In a re-run of an earlier drama exactly two weeks ago, the tow rope snapped as the ship was being dragged through the ice.

With the icebreakers Krasin (pictured below from 2006) towing the giant factory ship and the Admiral Makarov clearing the channel ahead, the ships only managed to break though "one and a half miles of thick ice" before the tow was lost again. We are told, however, that "spare towropes were delivered by a helicopter" and that the operation has been resumed. Make of that what you will. 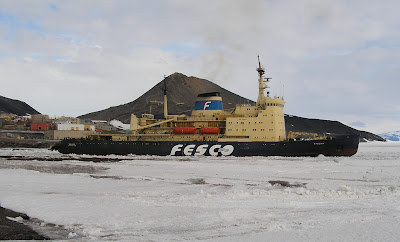 This is now the 27th day the Sodruzhestvo has spent locked in the ice. And, although the Russians have been fairly candid about the difficulties involved in extracting her, the continued delays must be trying patience. There are 40 miles to go to the ice edge (although Russian miles tend to be rather elastic) and the ships were last reported in "a complicated area of dense ice".

Thus, there is still no immediate end in sight to this drama. The authorities are only committing to "several days" before the ships are in the clear, and experience tells us anything could happen.