Stitched up in spades 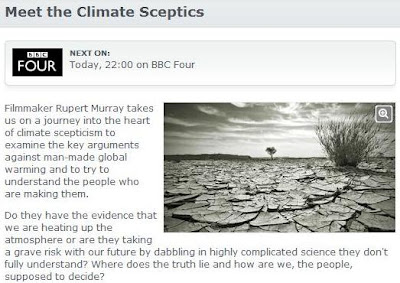 Dellers on his last but one post kindly put up a generic link to this blog, so I pointed readers to the specific post to which he was referring. However, events have overtaken me, and he has now put up a further post, which does link directly to my original piece. The circle is now complete.

The latest effort by Dellers is to draw attention to another BBC stitch-up, which purportedly has filmmaker Rupert Murray "taking us on a journey into the heart of climate scepticism to examine the key arguments against man-made global warming" where he tries "to understand the people who are making them".

That comes from the promotional spiel and is patronising tosh. It goes, purportedly to ask: "Do they have the evidence that we are heating up the atmosphere or are they taking a grave risk with our future by dabbling in highly complicated science they don't fully understand? Where does the truth lie and how are we, the people, supposed to decide? "

It is patronising tosh, of course, because – as I explain in my own post – the tone and conclusion of every TV documentary is decided well in advance of its making, long before a camera team captures the first footage. No commissioning editor on this earth – and certainly not the BBC – is going to commit the £300,000 or so budget to an open-ended "journey of discovery". Before any contract is signed with the film-makers, the exact "line to take" has been spelled out and agreed. The job of the film-maker is to deliver it – no matter what it takes.

However, not only is the spiel tosh, it is patronising tosh, for it assumes we are gulled into believing this is an honest journeyman at work. The film features, we are told, Britain's pre-eminent sceptic Lord Christopher Monckton as he tours the world broadcasting his message to the public and politicians alike. "Can he convince them and Murray that there is nothing to worry about?"

The answer to that, inevitably, is "no". We know this without even seeing the programme, which is on tonight at 10 pm on the TV channel BBC Four. And how do we know this? Because many months ago, Rupert Murray was commissioned to make a film to deliver that answer. It is as simple as that.

With all the things going on in this world, and all the important events that assail us daily, one wonders why the BBC bothers - why it is so important to it that the "right" message on climate change is given and maintained.  And the answer here is that, currently,  the issue climate change underpins a world view to which the BBC subscribes, one which, in its terms, legitimises social intervention on a huge scale.

This is then, less about a low-grade, compliant little programme-maker, and more about power - the imposition of a particular world view, and the suppression by whatever means, of any alternative messages. This is serious stuff.