She is out at last 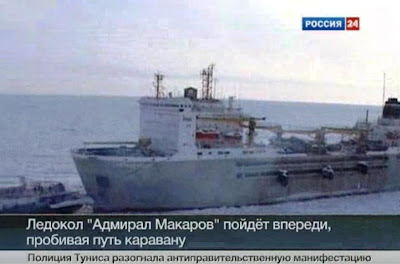 She is out of the ice, we are told, ending the month-long operation in the Sea of Okhotsk. "The operation to rescue the Sodruzhestvo mother ship out of ice trap has been completed," Russia's Ministry of Transport said in a statement today.

A month after the ships were first reported as trapped in the ice – and after a day with no news on the Okhotsk Sea crisis - we earlier received a cautiously optimistic report from Voice of Russia that suggested that the last vessel, the factory ship Sodruzhestvo, was on its way out of the ice.

The report spoke of the icebreakers Admiral Makarov and the Krasin having led the 32,000-ton giant through "another ten miles of thick ice" and of the convoy "moving to clear waters". Only the Voice of Russia seemed to be reporting this, however, and even it was hedging its bets by saying that "experts" are predicting that the ships will break clear, rather than making direct assertions.

Interestingly, we are beginning to learn quite how exceptional this incident has been. The most recent episode that is anything like it happened last year when two identical 104-ton fishing vessels were trapped in the ice. This was in the Terpeniya bay off the southeastern coast of Sakhalin, though, and the stranding happened later in the season, on 11 January. On 19 January, a Mi-8 rescue helicopter evacuated 14 sailors and the boats were temporarily abandoned.

This was at a time when exceptionally cold conditions were being reported, and temperatures were dropping as low as minus -38°C during the nights. Later, an icebreaker was called in, which towed the vessels to Korsakov in southern Sakhalin, normally an ice-free port and a centre of the sea fishery.

There was also an incident reported on 22 January 2008, when emergency crews evacuated nine of the 14 sailors on board four ships which got trapped in ice in the Sea of Okhotsk on 18 January.

The four ships – a survey cutter, a fishing seiner and two barges attached to the vessels – had been heading for winter anchorage at the settlement of Adzhan, Khabarovsk region, but became stuck in the ice. The vessels were found 100 kilometers off the region’s coast the next day by an AN-74 aircraft and the rescued people were taken by Mi-8 helicopter to the town of Nikolayevsk-on-Amur. 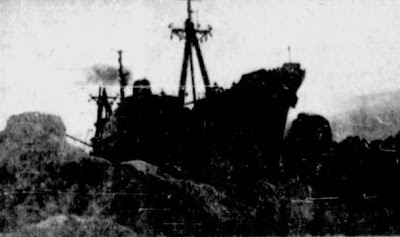 Before that, it seems we must go back to 1965 when, according to one report, five Soviet ships were trapped by ice in the same region. Without icebreakers available, this report says, boats with their crews had to wait until June to be released. However, a contemporary report seems to suggest that the ships were accompanied by the icebreaker Lavarev (pictured - the name could be incorrect - it might be Lazarev), yet were still unable to break free.

There is also a report of 26 March 1952 in the New York Times (paywall) of a giant ice floe trapping a large Japanese fishing vessel and a rescue ship off northern Hokkaido within sight of Russian held Sakhalin Island.

To find another comparable incident, we have to go back to 27 December 1935 when the 2,000-ton freight and passenger vessel Lozovski was trapped in ice en route to Vladivostok, with ice pressure threatening to crush the hull.

Some passengers made the hazardous eight-mile trek to shore – although one passenger and a crewman disappeared - while others set up tents on the ice to await rescue. In a neat bit of historical symmetry, the icebreaker Krasin – the predecessor to the current ship – was sent to the rescue and itself was trapped 30 miles from the Lozovski. Both ships had run out of coal and were reported to be relying on oil stoves for heating.

At the time of the report, the rescue ship Uritski had been despatched from Valdivostok with fresh supplies, and was planning to use dynamite to make a breach through the ice to rescue the trapped ships. Now, more than 75 years later, the second icebreaker bearing the name Krasin has finally pulled off a feat, the like of which its predecessor had failed to do.