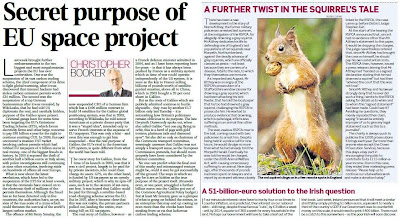 Two main offerings from the master scribe this week, one on EU megalomania - Galileo and carbon trading - and the other on another form of megalomania, the RSPCA and squirrels. Readers of this blog will be familiar with the EU stuff. The RSPCA is new, although one suspects that if there was an EU animal welfare agency, it would be modelled on the RSPCA and look very much like it.

Anyhow, the thought does occur that, as Booker writes of Wikileaks having dobbed in the unfortunate Berry Smutny, the now-suspended CEO of a German firm building Galileo satellites, it was supposed to be the subsidised Guardian that was masterminding the publication of the leaked US cables – one of which being the source of this information.

However, blog readers will recall that The Guardian did not put this information in the public domain, or any of the newspaper's EU partners. It was actually released by the non-EU Norwegian Aftenposten.

Even in its pursuit of truth, justice, apple pie and cheap headlines, therefore, The Guardian is rather selective about what it tells us, not wanting to upset its furry little friends in Brussels (or the euroslimic BBC for that matter). There are leaks, and then there are Guardian leaks, it would appear.