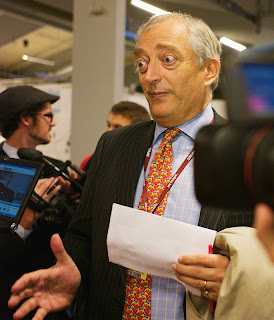 The BBC, we are told, has fought off a High Court challenge from Monckton, who has been trying to prevent the broadcast of the "Meet The Climate Sceptics" documentary tonight.

Monckton had applied to Mr Justice Tugendhat for an injunction stopping the programme, on the basis that it had not included his right of reply. He said that he felt he had been "unreasonably treated and misled" and complained of breach of contract. He wanted the programme to include his 500 words or three minutes which, he said, was proportionate in the context of a 60-minute film almost exclusively about him.

Interestingly, Tugendhat in dismissed the application, seems to have agreed with the BBC that there was no contract between Monckton and the film makers that would entitle him to a right of reply. Although "dressed up" as a claim in contract, the real complaint was one of defamation.

It is fascinating that Monckton feels the need to go to court on this, and more so that the BBC and the film-makers sought to defend it. Under normal circumstances, a balanced film would afford those involved plenty of time to argue their case.

But this is climate change, and we are talking about the BBC. Dellers is right. It was always going to be a stitch-up, and we're not going to be disappointed. Already, The Guardian is sniggering that the sceptic cause is "possibly not aided by having as spokesman the hereditary peer Christopher Monckton, who recently needed to be told to stop referring to himself as a member of the House of Lords".

That is the level of "debate" to which we have become accustomed.