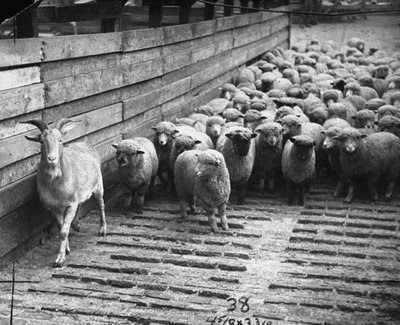 It was Autonomous Mind who first picked up the stench on the breeze from a little-known blog. This had it that Dan Hannan and Douglas Carswell were seeking to wind up the Better Off Out campaign. Supported by Mark Reckless, they are proposing that BOO should be replaced by a cross-party referendum campaign, which says AM, "confirms the suspicions of many people" that the pair "are nothing more than David Cameron’s useful idiots".

The clue as to the direction of travel came from an earlier post on the Hannan blog and, while it does indeed look as if the deadly duo are shifting their ground, I would not entirely endorse the analysis offered by AM. Given how the pair, and Hannan especially, function as token eurosceptics, their function to lead waverers into the Tory Party, the real clue to their role is given in the comments to yet another Hannan post. There it is suggested that Judas goat might be a better descriptor.

A Judas goat is a trained goat used at a slaughterhouse and in general animal herding. The Judas goat is trained to associate with sheep or cattle, leading them to a specific destination. In stockyards, a Judas goat will lead sheep to slaughter, while its own life is spared. Judas goats are also used to lead other animals to specific pens and on to trucks.

Funnily enough, though, Judas goats are illegal under EU slaughterhouse law. Once an animal has entered a slaughterhouse, it must be slaughtered within 24 hours. There are no exceptions permitted, and the only working animals allowed - and then just in the lairage - are dogs. As long as he is an MEP, Hannan would be safe enough from the branding.

However, so apposite is the description that we have nevertheless decided on an honorific for the Hannan, judging "Myrtle" to be the most appropriate. This is slightly better than Rose, but that name can hardly apply. The experience of that animal which led it to such great fame is that which is intended for the unwise and gullible who follow Myrtle to the final destination.

But, says Your Freedom and Ours, see how they squirm, while Witterings from Witney adds his own well-crafted points.