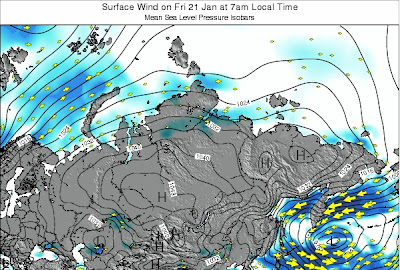 It would appear that the Russian are developing the same taste for understatement as the British (although we seem to be forgetting the art), in reporting "bad weather" on the island of Sakhalin.

High winds and blizzard conditions, brought by a deep depression to the southeast (synoptic chart pictured – see bottom right quadrant), have disrupted the ferry service linking the island with the mainland and closed roads in the north of the island. Visibility in snowstorms is down to less than 200 feet and in the Tatar Strait between Sakhalin and the mainland, where ice-free water remains, wave heights are over 12 feet. 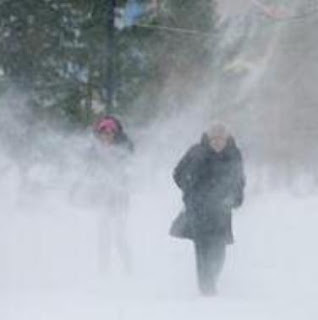 The particular relevance of this, of course, is that this is the same region where the two Russian ships and their icebreaker escorts are trapped, in the Okhotsk Sea, where yesterday, we reported that rescue attempts had been temporarily abandoned.

This is the most recent intimation of just quite how bad conditions are but, from observation of the chart, the wind patterns and strength are now creating the worst conditions imaginable for the trapped ships.

The problem arises from the peculiar geography of the Okhotsk Sea, with its shallow continental shelf along the northwestern coastal area. Because the sea is shallow, the water temperature can quickly cool down to freezing, allowing ice to form. With a constant offshore wind, the ice is carried away offshore continuously. Therefore, the waters tend to be always open adjacent to that part of the coast.

This open water is called a polynia, where ice is constantly produced, turning the area into what amounts to an ice factory, the total production of which is sufficient to cover the entire Okhotsk Sea. With the wind now from the northeast, the loose ice is being driven into Sakhalin Bay, where the ships are trapped, adding significantly to the ice depth and extent.

Under pressure from wind and currents, the ice driven into the bay tends to lift and buckle, forming pressure ridges and hummocks, some to as much as 20 feet depth or more. And that is what is happening right now. By the time the current storm has abated, the ice may be so thick and dense that the trapped ships cannot be extracted. 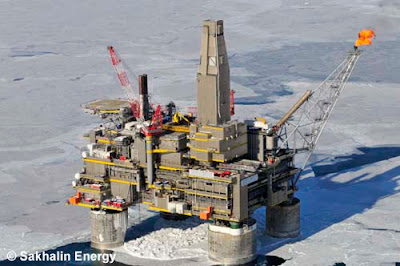 Meanwhile, the media has suddenly woken up to the Okhotsk Sea, but not to the ongoing drama. Apparently prompted by the WWF, they are recording concerns that Russian plans, in partnership with BP, to exploit oil and gas reserves in the region (above) might adversely affect a small population of rare Grey Whales.

In the manner of the anti-human greens, like Geoffrey Lean in his current blog, they are entirely oblivious to the current drama. While they are happy to emote about whales, human beings at risk are of no consequence.

Perversely, it is global warming which is improving the exploitation potential or the region, supposedly causing the reduction of the "poster-child drift ice" (pictured above) - about which the greenies were complaining in 2008 and again in 2009, with an additional interview here. But, if the run of bad weather becomes a trend, exploitation of the region might be far more difficult.

Then, at least, the greenies are getting some ice back (pictured 8 January this year), even if the people of Sakhalin and sailors trapped in the Okhotsk Sea are not wholly appreciative. When you think about it, for the greenies, global cooling in the region is a "win-win". They might even get rid of a few hundred humans. What's there not to like?