It was bound to happen 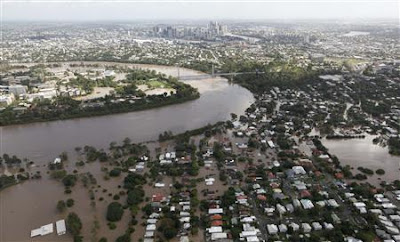 Water has peaked at almost three feet below the level of deadly 1974 floods in Brisbane, giving the city some respite from the disastrous floods. However, this has not stopped the state premier's favourite warmist launching a pre-emptive strike claiming the floods for his own.

This is professor Will Steffen, the executive director of the ANU Climate Change Institute, who is forced to concede that there is "no direct link" between global warming and the flash flooding in Toowoomba, but he claims that climate change would lead to heavier, more frequent rain.

Never mind that the prevailing warmist orthodoxy has been for prolonged droughts – which is why, of course, the Australians have spent over $13 billion on desalination plants. Now, Steffen says that, "As the climate warms, there is more water vapour in the atmosphere ... This means that there is a probability that there will more intense rainfall events around the world".

Professor Neville Nicholls, an Australian Research Council Professorial Fellow at Monash University, is another one getting his oar in, saying that scientists would look at possible links between flash floods over the past 24 hours and global warming.

With the sort of weasel words we have come to expect from these people, he stresses that no "current link" can be made between them, arguing they were the result of a strong La Nina event. But he then goes on to say, "Is the La Nina that strong because of global warming, or is global warming exacerbating the effect of La Nina? Honestly, we don't know. But just because we don't now doesn't mean it's not happening".

"You'd have to be a brave person to say it [climate change] is not having some sort of effect," he adds. "I can guarantee you in the next couple of years people will start looking back at this event and asking was it so unusually strong because of global warming."

Matthew England of the Climate Change Research Center at the University of New South Wales in Sydney, is also getting in on the act. "I think people will end up concluding that at least some of the intensity of the monsoon in Queensland can be attributed to climate change," he says. "The waters off Australia are the warmest ever measured and those waters provide moisture to the atmosphere for the Queensland and northern Australia monsoon."

David Jones, head of climate monitoring and prediction at the Australia Bureau of Meteorology in Melbourne, then chips in. "We've always had El Ninos and we've had natural variability but the background which is now operating is different," he says. "The first thing we can say with La Nina and El Nino is it is now happening in a hotter world." That means more evaporation from land and oceans, more moisture in the atmosphere and stronger weather patterns.

And then we get US climate scientist Kevin Trenberth. He says the floods and the intense La Nina were a combination of factors. He pointed to high ocean temperatures in the Indian Ocean near Indonesia early last year as well as the rapid onset of La Nina after the last El Nino ended in May.

But the fact is that, within the bounds of natural variability, there is nothing exceptional about the intensity of the rains, and they accord entirely with a well-observed long-term cyclical pattern. Further, as always, the actual levels of flooding are nothing exceptional, as the historical record shows.

Local problems, though, have been exacerbated by urban development and the lack of sensible precautions, about which the Queensland government and the city council were warned a decade ago. Needless to say, with greed, stupidity and latterly the obsessive focus on "climate change", the warnings were ignored.

All of this was pre-ordained. It was bound to happen, but now it has, the warmists are going to be the last people on this earth to admit the flaws in their religion. This is, and has to be, another example of climate change. No other explanation is possible.