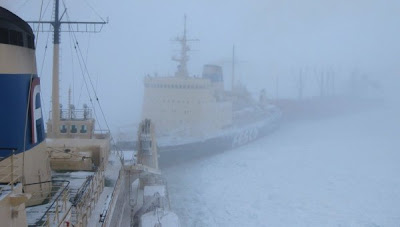 I was not expecting to be writing about the Okhotsk Sea today, but in yesterday's account there were warnings that the crisis was not quite over. And indeed that is the case, with Voice of Russia observing that the rescue operation "will not be over today". Conditions appear to have deteriorated sharply and, last night, the four-ship convoy covered "no more than three miles". A helicopter is out reconnoitring the ice situation today.

Once again, we are left to piece together the story from diverse sources (with no input from the Western media). From TASS we learn the intriguing detail that the Bereg Nadezhdy fish carrier needed refuelling, an operation that appears to have been completed. She now "stays on the ice waiting for her turn for the pilotage", we are told. We also get an idea of the weather, said to be "favourable" with the wind about 20 miles per hour and the air temperature at -10°C.

But there is also the detail, then added, that "further movement is impossible due to the engine malfunction on the Bereg Nadezhdy ship and the lack of fuel".

It is then to Ria Novosti that we turn, finding that strong winds and heavy ice floe in the area are making difficulties. Weather conditions in the area are normal, but strong winds are "causing quick shifting and thickening of ice floe", which has "seriously hampered" the rescue efforts. This seems to be the 1983 shipping crisis all over again, when wind-driven ice-floes also thickened suddenly, causing ice to close round the ships, too fast for them to escape.

There is this still no indication when the ships will be totally in the clear, and you get some hint also that this is creating political stresses, with a report that Putin has "serious problems" in controlling his self-serving bureaucratic machine. He "may pretend to be in charge of the rescue operation in the Sea of Okhotsk," the report says, "but in fact it is directed through the bargaining between the company owning the fishing fleet and the company that owns the ice-breakers."

Oblivious to all this then comes Roger Howard in The Daily Telegraph telling us that "regional sea ice is retreating fast, threatening to raise global sea levels, destroy traditional habitats and ways of life, and accelerate the rate at which the planet as a whole is warming up".

Notwithstanding the flash of scientific illiteracy (since when does melting sea ice raise sea levels, global or otherwise?), the sailors trapped in the Okhotsk Sea would be surprised to learn that "regional sea ice is retreating fast." While Howard points to the "silver lining" to come out of global warming, causing an ice retreat which allows exploitation of oil, gas and mineral reserves, this current crisis underlines the fickle nature of the ice.

There are very great dangers in working in this region, as today's events demonstrate. Nature still has the capacity to surprise.