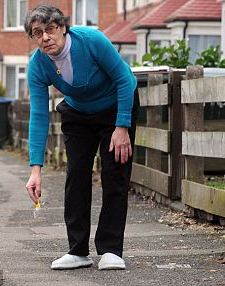 There is no hope of alien life in space, we are told, from which we can take some comfort. We will never be embarrassed by an ET-like figure coming down to Earth to wonder what strange creatures inhabit a country called England, once known for its moderation and sanity.

We are thus spared its observations that, in between chopping up £4 billions-worth of brand new, unused aircraft, we have officials who descend into the absurd, fining a 64-year-old grandmother £50 even as she picked up a piece of litter she had accidentally dropped.

We need not worry about its puzzlement at the contrast, when the state broadcaster hires 20 dog-owners to get their pets to poo in a local street, to demonstrate to grateful licence (aka tax) payers what it will be like if they don't pay even more tax. And we are spared the problem of having to explain why BBC Trust chairman Sir Michael Lyons has run up expenses totalling more than £12,000 in six months, the grateful licence (aka tax) payers thus having to stump up for, amongst other things, £5,593 on hotels, £4,501 on train fares and £427 on flights.

There will also be no ET to discover that this is the country where stunned councillors have been told that there will be no police patrols after 8pm at newly-built adventure playground at Waterlees Park in Wisbech, Cambridgeshire, because it is considered "dark and dangerous".

We would not have to cringe with embarrassment at its amusement when it found a tourist taking a souvenir model soldier home from Britain had been ordered by security officials as Gatwick airport to remove its three inch rifle before boarding an airliner, they having ruled that the tiny plastic replica was a "firearm".

Our putative ET will never learn that the madness also spreads. It will not find out that European authorities are still unable to charge for a gas produced when people breathe out, and which is absorbed by plants as fertiliser, because thieves have stolen £25 millions-worth of the permits to produce it, and despite confident predictions, have not been able to fix the insecure computer systems.

And it will never know that French elephants who pack their trunks and go to the circus in North Africa have become Moroccan "nationals" and cannot return home because of bureaucratic rules - and nor will it find out that most "green bio-fuel" aren't. Perhaps it is just as well there is only one world. There probably isn't enough room in the universe for two of them.  And the aliens have taken over anyway.  We don't need an ET to phone home and tell everybody how mad we are.