In days to come 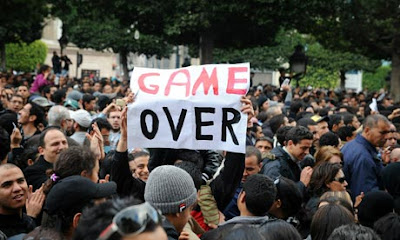 A striking feature ... has been the unpopularity of the regimes combined with their depressing ability to stay in power. Most have found ways of preventing revolutions or military coup d'etats through ferocious security services protecting rickety state machines that mainly function as a source of jobs and patronage.

This is Patrick Cockburn writing in The Independent. He is referring to the Middle East, and specifically Tunisia - or thinks he is. The Middle East, he says, still has a reputation for coups but a striking feature of the region since the early 1970s is how few of the regimes have changed.

He adds: "The forces behind the Tunisian events are not radically new but they are all the more potent for being so long suppressed" (my emphasis), then telling us: "Western governments have been caught on the hop because explosions of social and economic frustration have been long predicted but have never happened".

There but for the grace of God go they, one might think. But they are not very good at joining the dots.  The odd thing is, though, in years gone by, we used to look at such scenes and think ourselves lucky that we lived in a stable country and could avoid the turmoil.  But these days, such events are more likely to invoke the question: "why can't we do this?".

The wish is the father of the thought, they say, but with the caution, "be careful what you wish for". On the other hand, if we wish to avoid "explosions of social and economic frustration" can we merely avoid talking about the possibility in the hope that they will never happen?