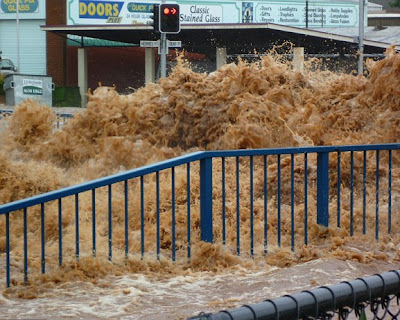 Posted originally on the comments to Booker's column, Dellers has picked up a contribution from "Memory Vault" who lives in Queensland and, with increasing concern, is watching the devastation that has so far claimed more than 70 lives.

But the issue here – as it was with the horrendous bush fires in Victoria in 2009, is that the disaster could by and large have been prevented, or the effects reduced, but for Greenie intervention. And two individuals are particularly in the frame, the first being environment minister Peter Garrett, who took it upon himself to block a proposed dam that would have prevented the flooding of the town of Gympie.

But "Memory Vault" particularly condemns a second individual, Tim Flannery, a professor of earth and life sciences at Macquarie University, chair of the Copenhagen Climate Council, and the 2007 Australian of the Year. It is he, above all, who managed to convince the state government that the predicable cycle of droughts and floods will no longer happen, and that the state, instead of beefing up defences from the last major event 30 years ago in 1974, should prepare for long-term water shortages.

"Growing evidence," declared Flannery, "suggests that hotter soils, caused directly by global warming, have increased evaporation and transpiration and that the change is permanent. I believe the first thing Australians need to do is to stop worrying about 'the drought' - which is transient - and start talking about the new climate". It was input such as this that had the state government spending $1.2 billion on desalination plant, instead of flood defences, a plant now mothballed, as the flood waters mount. 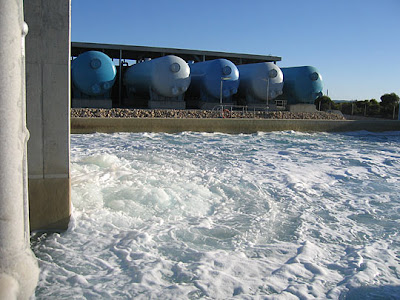 This trend was well established four years ago in 2006, when the city of Perth opened the first large desalination scheme at Kwinana (pictured). Visiting the plant on 18 June 2007, Australia's minister for the environment and water resources, Malcolm Turnbull,was telling the world that Perth was the "canary in the climate change coal mine," a city scrambling to find other sources of water for a growing population.

In December 2008, Ross Young, executive director of the Water Services Association of Australia, was telling Discover magazine that Australia was "the canary in the coal mine when it comes to the impact of climate change on water resources." He added: "Many people thought there would be adequate time to adapt to less water. The lesson from Australia is that the shift has been very dramatic and has occurred in a very short period".

By 10 July 2010, the New York Times was reporting: "Arid Australia Sips Seawater, but at a Cost". In one of the country’s biggest infrastructure projects in its history, the paper told us, Australia’s five largest cities were spending $13.2 billion on desalination plants. And, with a startling lack of originality, Ross Young was repeating the mantra: "We consider ourselves the canary in the coal mine for climate change-induced changes to water supply systems," he said, describing the $13.2 billion as: "the cost of adapting to climate change".

Needless to say, the Queensland state Premier Anna Bligh is now talking of "exceptional events", and the BBC happily chirps about a "freak of nature" – an attempt to reinforce the subliminal message that nothing could have been done.

But the real story is bizarre, another classic example of the greenies forcing major distortions in policy which cost money we haven't got and eventually kill people. Increasingly we see that the obsession with global warming is not a risk-free option. It costs money we can't afford, and lives. This must stop.