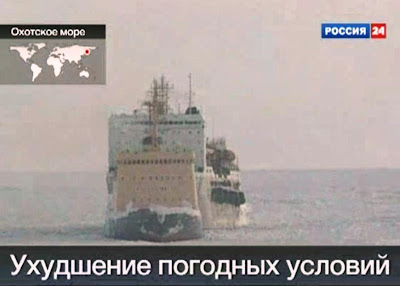 Russian icebreakers Krasin and the Admiral Makarov, engaged in the Okhotsk Sea rescuing the ice-trapped factory ship Sodruzhestvo, have now cleared the most difficult stretch of ice, covering eight nautical miles over the past 36 hours.

We are told that the ships still have 25 miles before they reach open sea but, from all accounts, the worst is over. We are nonetheless reminded that the Sodruzhestvo (pictured) has been the hardest of the trapped ships to tow due to its wide body. The icebreakers have to coordinate their efforts to clear a wide channel in thick ice for the vessel to finally reach open waters.

TASS is reporting that the success raises hopes that the month-long rescue operation could end in two more days. The convoy will soon reach the area of drifting ice. After that thirty miles will remain to clear water. "The voyage is likely to take another two days and the rescue operation may end on January 30," Far Eastern Shipping Company spokeswoman Tatyana Kulikova says.