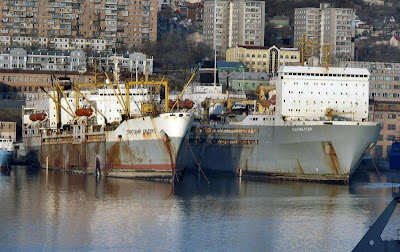 As the Sodruzhestvo (pictured above – ship on right) enters its 26th day of captivity in the ice of the Okhotsk Sea, the agency TASS was confidently reporting that she will be freed today. That news was posted early this morning, Moscow time and there are quite often updates issued. And, in the early evening here (England), it is in the early hours Wednesday in the rescue area, and all we are getting is an ominous silence.

The two icebreakers were then to operate in tandem, leading the Sodruzhestvo to ice-free water for about 50 miles across heavy hummocky ice. The weather conditions were said to be favourable and the last we had heard was that the Krasin had been clearing the Sodruzhestvo from ice and preparing a channel for towing.

Meanwhile, as this drama plays out, US Rear Admiral Dave Titley, at an Arctic conference in Tromsø, Norway, is telling us that commercial ships could be sailing across an ice-free North Pole as soon as 2035.

Titley predicted that, as the ice-free period gradually increased, the Bering Strait between the US and Russia would begin to rival the Persian Gulf and the Straits of Malacca between Malaysia and Indonesia as one of the world's most important shipping lanes.

This, no doubt, will come as music to the ears the crew of the Sodruzhestvo, who might also be entertained by the total lack of Western media coverage. The only news from that source, coming out of the region concerns a "rare whale" which has left the Bering Sea and is heading for the Gulf of Alaska.

Researchers have been tracking the whale since they tagged it off Russia's Sakhalin Island on 4 October, and the media is showing far more interest in this solitary mammal than it is the fate of over 400 trapped crew.  It would be nice to think that the Japanese had a whaler handy to do a bit of quick "research", which could then grace the plates of Tokyo diners.