Helping it on its way

The PA (no link) is reporting that the UK is facing fines from Brussels of up to £1 billion over the way it uses EU funds. Some £398 million of so-called "financial corrections" have already been imposed by the EU commission and the Treasury has set aside another £601 million to cover further liabilities.

The money is stopped when the Commission feels that countries have failed to meet its rules and regulations on the allocation of cash. Most of the problems relate to agricultural payments.

The figures are in a National Audit Office report published today (but not yet available online) on Britain's use of EU funds. Auditor general Amyas Morse has qualified his opinion of the 2008/9 accounts, saying there was "a number of significant accounting and other issues" which the Government needed to address. 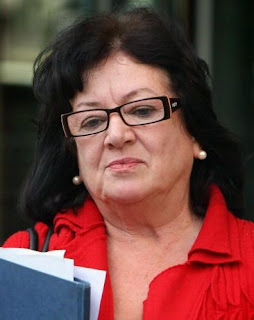 On the other hand, though, giving this amount to the EU will certainly help it pay for Galileo. Is this Euroslime Dave's way of slipping them the dosh on the sly?

But then there's little Dave's Localism Bill. Baroness Margaret Eaton, chair of the Local Government Association (LGA) says it must be changed or councils could be fined more than £1bn by EU.

The LGA is concerned about plans to make local authorities pay EU fines when targets on air quality and recycling rates are not met nationally. But with the current wave of cuts, councils will have to raise council taxes or cut more services – worse still, the problem could happen very soon because the government is already exceeding air pollution targets and could be fined £300m. Other EU directives could take this figure to £1bn.

"The potentially billion pound fines from Brussels are for breaching national targets, which were agreed by central government with the EU," Eaton says.. "Changing the goalposts now to make councils liable for fines is unfair to them and unfair to the local residents who may have to foot the bill. The government must amend this unfair, unworkable, dangerous and unconstitutional legislation."

So, £2 billion extra on the way to the EU - much of it from local taxpayers?  That'll do nicely, Dave.