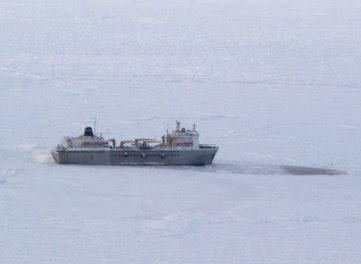 After what appeared to be a close-down on publicity, the Okhotsk Sea crisis moves into its final phase with what the Russians are claiming is the successful extraction of the Sodruzhestvo from the ice and her return to open waters. We also learn that the fish carrier Bereg Nadezhdy is still in the ice but is now being towed by the Krasin and the Admiral Makarov.

This seems to have been a change of plan. It was originally intended that the two trapped ships, having been re-united, would then be escorted out of the ice in a single convoy. Some clue of the plan change came earlier today when the Russian Transport Ministry states that an operation had started "early on Sunday" to free the Bereg Nadezdy.

On instructions from the rescue coordination headquarters in Yuzhno-Sakhalinsk, we are told, the icebreakers approached the trapped Bereg Nadezhdy at 05:00 am Moscow time, when it was five miles to the south of the Sodruzhestvo, and started preparing to tow it. 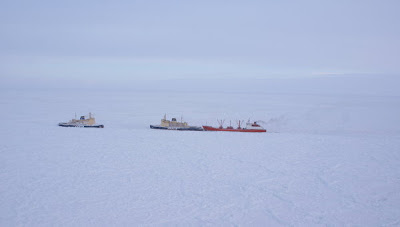 "At 09:25 am Moscow time, the icebreakers started towing the refrigerator ship towards the Sodruzhestvo mother fishery ship," the press office said. But even then, it was telling us that the icebreakers intended then to move the ships together, toward clear waters in a single-file convoy.

At some stage, though, they must have decided  that taking two ships out at the same time was beyond the capability of the breakers. Thus it became a matter of one at a time, this time taking the bigger ship out first. It would be nice to have some detail as to how this was achieved, but for the moment we can only surmise.

However, the nose-to-nose formation (pictured above) might give some clue.  As we saw earlier, what may have happened was that the Krasin goes ahead and clears a channel while the Makarov tows more slowly (seen here with the Bereg Nadezhdy). Once the channel is clear for a stretch, the Krasin returns and they both "work" the channel to get the ship through.

Whatever way it was done, they got the big beast out - a testament to the skills and seamanship of the Russians. The adventure is all but over.