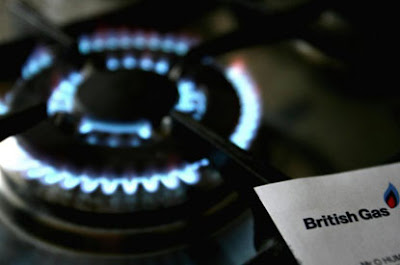 The Daily Mail is running a piece telling us how "millions of hard-pressed families are being further squeezed by punishing rises in fuel bills and food prices".

The tenor of the article is that you must look to the "energy giants" for the reason why fuel prices are increasing, the story lead being focused on E.ON, the "German-owned supplier", which is putting up electricity tariffs by 9 percent and gas by 3 percent. This will add an average of £62 to annual dual fuel bills for 4.3 million customers.

This is where it all gets very difficult. Internationally, the trend for gas prices is downwards, but in the UK, retail customers are being charged more and more. Some of that is undoubtedly due to green taxes, levies and other imposts. An amount is due to the need to build investment capital to expand and renew the production and distribution systems – although costs there are inflated by greenery.

Doubtless, an amount is also due to corporate greed, and the ability of semi-formal cartel status of the energy suppliers which allow them to rig prices, on top of a weak regulator which is happy to see the confusion as a cover for the rising cost of greenery, which it supports.

There are other factors, not least that the foreign-owned companies, which charge less for their supplies on their home market, over-charge British consumers, in this more "liberal" market, in order to recoup losses.

Thus, we end up paying more for energy than virtually any other consumer in Europe (and the developed world). No one knows why, and even the experts disagree. Different sections of the media have different explanations, but all are quite happy to use "corporate greed" to hide the cost of the greenery.

The outcome, therefore, is that we not only get fleeced – we know not precisely who is doing the fleecing and why, and thus know not who specifically to blame. At the top of the dung hill, though, is the government – with that odious creature Huhne nominally in charge. That is as good a place as any to start.

But that alone gets us nowhere. Tomorrow there will be a by-election in Oldham and Saddleworth, to appoint an MP as a replacement for the disgraced Labour MP, who broke the rules. Chances are, the electorate will go for another Labour MPs.

And today also, the Labour MP for Barnsley agreed to resign, after being caught with his hands in the till. In due course, there will be a by-election and, in due course, another MP will be elected. It will be a Labour MP – I can guarantee you that.

Therein is the heart of the problem. We are served by a bunch of crooks, gathered together in a party structure which is long past the sell-by date. Yet, at each election, the sheeple come out – albeit in reducing numbers – to vote them back in.

Yet, these same sheeple will be there amongst the rest of us, complaining about energy bills, and not one will join up the dots. We are the authors of our own decline.