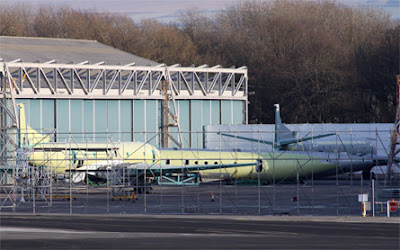 The crying waste involved in scrapping the remaining Nimrod MR4s sees the end of a saga that began with a decision made by Portillo in his capacity as defence secretary for the Major government. How apt it is that the mistake, having been made by a Tory minister, should have to be corrected by ... a Tory minister. And how typical it is that the taxpayer foots the bill, currently up to £4.1 billion, for which we get nothing at all but an expensive pile of scrap.

It is not altogether a bad idea trying to graft on new technology onto old airframes, but this project carried the practice to extremes, ending up with virtually new (but not quite new) aircraft, at more than three times the cost (and possibly much more) of buying and converting new airframes. For once, I am with Lewis Page on this. We are better off without these white elephants.

The worst of it, though, is that we really do need this capacity, and none of the alternative options really cut it. Apart from anything else, if we have a serious maritime incident out in the near or mid-Atlantic – such as, say, a large ship sinking - we will need overhead assets for command and control.

But, while the clever dicks prattle, what this case underlines is the importance of procurement, the long shelf-life of bad decisions, and the costs of getting it wrong. Yet, at the time Portaloo made his decision, there was very little intelligent (or at all) discussion in the media. Everybody can be wise after the event. What we need, though, is to be wise before the event, in which case the worst of these disasters could most certainly be avoided.

Unfortunately, that would require of the media, amongst other things, to spend some time researching and understanding a subject, and writing intelligently about it. It is not that hard - look at FRES for instance - but this is not something in which our media has shown any great skill.

Thus, for all the weeping, wailing and gnashing of teeth, we are most certainly likely to see history repeat itself, with more procurement disasters probably already in the making - the Army has not yet abandoned its ambitions for FRES.