Questions may be asked 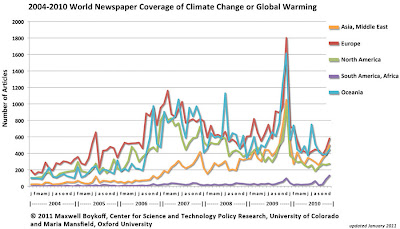 The two "most respected" national weather services in the US, NASA and the National Oceanic and Atmospheric Administration (NOAA), agreed that 2010 tied with 2005 as the hottest since records began in 1880. So writes the tree-hugging Louise, in The Daily Telegraph, telling us that, overall, 2010 and 2005 were 1.12F (0.62C) above the 20th century average when taking a combination of land and water surface temperatures across the world.

That the fair Louise uses the words "most respected" is interesting. Most respected by whom, one wonders – especially when Hansen's GISS, masquerading as NASA, is an object of derision to the average "denier". This appears to be the classic reliance on the power of "prestige" to bolster a failing case.

Meanwhile, Bob Ward in The Guardian is asking why the UK media are ignoring "climate change announcements". Many commentators, it appears, would have liked to have given him an answer but, from the blizzard of deletions, it seems the moderators got there first. Questions may be asked, but answers are not permitted.