Why do we put up with this? 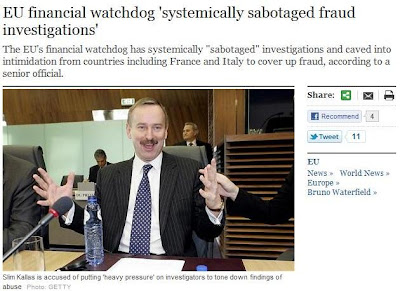 Bruno has a cracking story, picked up from the Dutch Volkskrant newspaper, although it has been widely trailed in the Dutch press - here for instance (use Google translate).

The story concerns Maarten Engwirda, a former Dutch member of European Court of Auditors for 15 years, who retired 10 days ago. He has alleged that abuse of EU funds was swept under the carpet by the ECA. "There was a practice of watering down if not completely removing criticism," he says.

Siim Kallas, the EU commission vice-president, responsible for anti-fraud measures from 2004 to 2010 (now transport commissioner) is accused of putting "heavy pressure" on investigators to water down findings of abuse.

However, Engwirda, who also describes an endemic "cover-up culture" within the court and wider EU institutions that had prevented the true extent of fraud from being disclosed, also claims that changes made to the system in 2008 meant that procedures were "drastically changed" and the same degree of obstruction is no longer being experienced.

One takes that with not so much a pinch as a shed-load of salt, especially as Engwirda tells us that: "All these abuses never came out into the open because of the Kremlin-style information we provided". The process may be different but the abuse most certainly goes on.

Meanwhile, MPs have overwhelmingly voted against amendments to the EU bill, as we anticipated, defeating them by 39 to 314, and the dismal Cash has rolled over with a promise from the government that it will re-write the explanatory notes to the Bill.