Breaking news as of 16:30 GMT was that the rescue operation in the Okhotsk Sea had been suspended "as weather conditions have deteriorated".

What was hoped to be the final phase of the operation to extract the trapped shipped was started at 21:30 Moscow time on Wednesday. "However, the deterioration of weather conditions (a cyclone is hovering over Sakhalin, and there is no transport connection) has suspended the active phase of the operation to get the ships out of ice," a source said. "Abnormally bad weather is characterized by zero visibility, strengthening winds and ice compression."

Earlier, we had learned that the rescue was continuing. With all the delays though, the icebreakers and the trapped ships have spent so long in the ice field that it had grown massively bigger – and thicker – and they were still trapped, making minimal progress.

Voice of Russia was telling us that, as of "this morning", i.e., when their piece was being written, the Krasin and Admiral Makarov had managed to escort the Bereg Nadezhdy only two miles. After that, it said, the icebreakers would return for the Sodruzhestvo, "that was left in a relatively safe zone earlier". "It is still unclear how long the whole operation will take," the agency was saying. That was very much a change of tone.

In an earlier report from TASS, however, we got the complete opposite. We have the two icebreakers piloting not the Bereg Nadezhdy but the Sodruzhestvo. I don't think they're wrong, or lying or anything like that, but there was a certainly a contradiction.

What I think might have been happening is that they running a sort of shuttle service, dragging one ship a few miles, parking it in relatively safe ice and then going back for the other one. Once the two ships are reunited, they then repeat the process all over again. 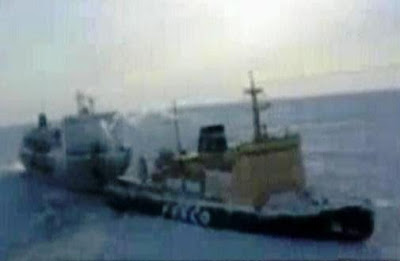 This has to be extremely fraught as the ice is clearly building up faster than they can break thought it. The reality is that they are deeper into the ice now that when the ships were first trapped on 31 December, now three weeks ago. And now, it seems, they are temporarily defeated, as the weather worsens.

Amongst all this, there is a confused story about a previous stop, triggered by a high ice pressure and repairs. I am not exactly certain, but I think this was the Bereg Nadezhdy, although there seems to be some ambiguity in the reports. Maybe it's just me. The reference to convoy movement being suspended on Tuesday "over a high ice pressure and high winds," confirms what we were reporting earlier.

As for photos, there is nothing new coming out of the system, but AP has done a video report and we've put it up (top). This is a composite, with what appears to be new and old pictures, but in fleeting glimpses, we get an idea of quite how bad it is there.

We also see for the first time the Sodruzhestvo under tow. From the angle it is difficult to see, but she looks to be close-coupled. I wasn't sure they could do that with such a big ship, but they do seem to be doing it. I’ve taken out a screen grab, cleaned it up and posted it (above). Quality is not very good, but at least you can see it for yourself.

Under current conditions, it is unlikely that we'll see much more in the way of new photographs for a while. There is a fight for survival going on out there. As always, I'll keep you posted.