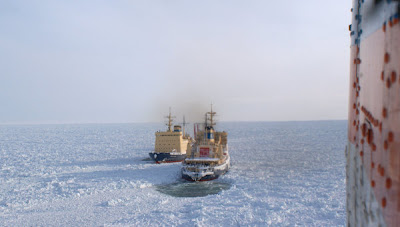 Here we have it again, this curious "dance" by the Russian icebreakers, which we observed yesterday. This time, the picture (above) accompanies the news that the Krasin and the Admiral Makarov have managed now to extract both the Sodruzhestvo factory ship and the Bereg Nadezhdy fish carrier out of thick ice in the Okhotsk Sea.

With a little more detail given, we learn that the icebreakers first towed the bigger factory ship to a safer area, and then returned for the Bereg Nadezdy, which they took to thinner ice. The report acknowledges a change of plan but it looks as if, in the final stages, the two ships were escorted out together.

The drama is not entirely over though. TASS reports that the ships have got through the "hardest 10 miles" with the highest ice pressure. The convoy will keep sailing northward to a safe area in the Okhotsk Sea, which "may take another few days". 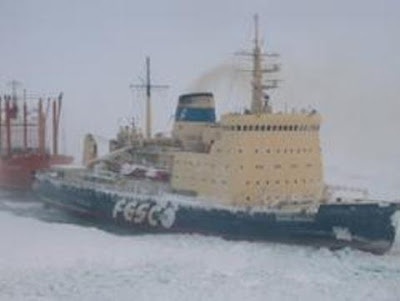 Led by the Krasin, there is an unintended irony here. The ship is named after Leonid Krasin, the Russian Kommisar who is credited with devising the refrigeration system which preserved Lenin's body. Having put his body in ice, so to speak, this icebreaker, the second to bear the name, is dedicated to getting bodies out of the ice, in a manner of speaking, which it has done so spectacularly this time.

With the crisis having started on 31 December, it has now taken 18 days to get these ships released, and mighty relieved they must be. Weather continues to deteriorate as global warming takes its malign grip of the region, with 50 mph winds and temperatures currently down to -20°C. Think how terrible it might have been had the world actually been cooling.