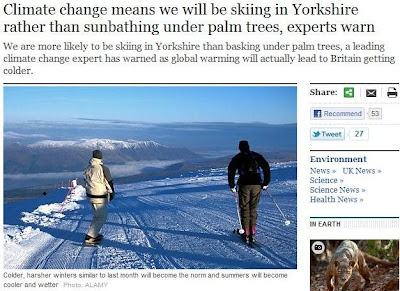 There are probably no two words in the entire English language that have become more debased than: "experts warn". That simple truth, however, evades the simple souls recruited by The Daily Telegraph to write their headlines, their latest offering being: "Climate change means we will be skiing in Yorkshire rather than sunbathing under palm trees, experts warn."

This announces yet another dollop of from the incredible Richard Alleyne, styled as the paper's "science correspondent", his labours helping to turn a once respected newspaper into the laughing stock that is has become, driving down the circulation to the point eventually when even this blog will be able to boast more readers.

Of course, we all remember the contribution from The Independent on 20 March 2000, when we got the headline: "Snowfalls are now just a thing of the past". According to Dr David Viner, a senior research scientist at the climatic research unit (CRU) of the University of East Anglia - former home also of Paul Nurse - within a few years winter snowfall, would become "a very rare and exciting event".

Now, that Viner's little fantasy no longer holds true, we thus have the re-writing of predictions on a scale that would have taxed even the inventive powers of Winston Smith. And in this case the honours go to Dr Simon Boxall, of the National Oceanography Survey, who tells the gullible Alleyne that, while the planet as a whole will get much warmer, this country will see temperatures plunge as the ocean currents and weather patterns around the world change.

But such is the nature of the British press that they haven't quite caught up with this internet thingie, and still believe - in common with the political classes - that communication remains a one-way process. For supposedly intelligent men and women, they are having extraordinary difficulty learning the very simple lesson, that ex cathedra pontification from idiot hacks no longer works. We are amused but not persuaded, and are increasingly taking our custom elsewhere.