Sucking at the public teat 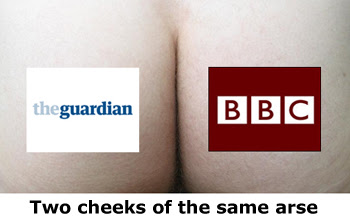 Autonomous Mind (from whom the graphic is "borrowed") picks up on the Peter Sissons article in The Daily Mail today, repeating his comment that:


In the later stages of my career, I lost count of the number of times I asked a producer for a brief on a story, only to be handed a copy of The Guardian and told "it's all in there".

In the comments to the Mail piece, we then have our own Jonathan Stuart-Brown, who also makes some pertinent observations:


The Guardian sells only 250,000 copies a day (and falling). Take away the bulk buying by libraries, quangos, unions, universities, charities, and BBC and the real figure is 50,000 genuine purchasers mostly in West London. Yet The Guardian has a monopoly on BBC recruitment adverts (many millions each year from licence fees) which subsidise it and drive the genuine purchases (looking at the jobs). Why will no MP and certainly not Jeremy Hunt Culture secretary challenge this?

This raises a very interesting issue. It is not as if the BBC actually needs The Guardian to help it fill its vacancies. There is the extremely expensive BBC website and its own jobs portal, which is more than adequate for the purpose. There, incidentally, it tells us that: "At the BBC we respect each other and celebrate our diversity so that everyone gives their best." I feel slightly nauseous.

Nevertheless, the issue here is that the BBC – alongside government, national and local, with its job adverts - is subsidising The Guardian to the extent that, without the input, it would most certainly cease to exist as a newspaper.

The real reason, we suspect, is that the newspaper is a loss-making enterprise. And with its parent group reporting £171 million losses last year, it could hardly survive still further losses. Nor indeed is this a successful enterprise in other respects. Its December circulation of 264,819 shows an 11.89 percent drop on the same time the year previously.

In all measurable respects, this is a failing business. But that it should be so heavily subsidised by the BBC is unconscionable – its financial dependence effectively makes it the BBC's pet poodle and its staff magazine.

What the subsidy also does is deprive The Guardian of any moral (or actual) authority. Without being able to pay its own way, and reliant on public "charity", this is just another entity sucking at the teat of public money. Its staff – and especially the likes of George Monbiot (aka Moonbat, although "ocean-going shit" will do) – left to the rigours of the real world, would be on the dole.