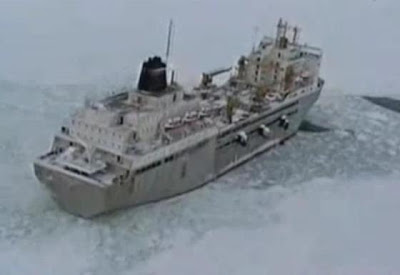 According to the Voice of Russia, in the last 24 hours, the ice trapped Sodruzhestvo factory ship has made a mere 300 meters in the past 24 hours - not even twice its own length. Aided by the Admiral Makarov and the Krasin, Ria Novosti confirms that the convoy has only covered 1.8 miles "in heavy ice floe" since the start of what was hoped to be the final phase of the rescue in the Okhotsk Sea crisis.

"The convoy is moving very slowly due to breaking towing cables and constant shifting of heavy ice floe," says the spokeswoman for the factory ship owners, Tatyana Kulikova. "The ships have managed to cover only 1.8 miles since Wednesday, and have about 20 miles to go till they reach clear waters," she added. The Krasin is towing the Sodruzhestvo, while the Admiral Makarov is leading the convoy, attempting to clear a passable channel in the thick ice. 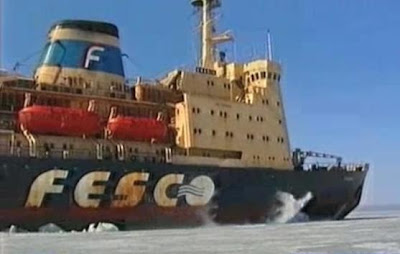 Since the beginning of the current operation on Wednesday morning, the rescue operation has been suspended twice because of the breakage of towing cables. Yesterday we learned that a replacement cable had been brought by helicopter. Now, that cable seems to have broken. This is the third time a breakage has been reported.

Looking at the sheer bulk of the Sodruzhestvo (pictured top), it is not at all surprising that problems are being experienced. But with it having spent over four weeks trapped in the ice, the 348 crew must be wondering whether their ship will ever again see the open sea. Still, as one of our readers observes, as long as they have this, they won't get bored.