The "finality" of an election 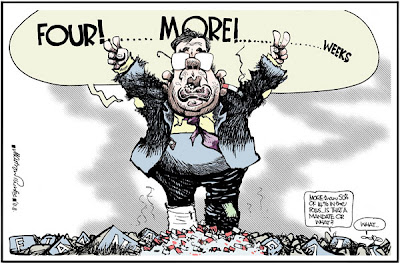 "This country and its people have gone through hell and fire over the last number of years … We need to restore hope and confidence in this country and fix a system that has been manifestly broken," says Irish Labour leader Eamon Gilmore, on hearing that Cowen has finally caved in and named the election day - 11 March.

For a record of the quite extraordinary events that led to this, read the report in The Irish Times. I can't do better than this, and I'm not even going to try. As a taster: writes Miriam Lord, "One word kept surfacing, uttered by all sides: delusional...". Then click though to the links especially this one, and pick up the story from there. We have here a repository of journalism as it should be, writing the first draft of history. Savour it.

Also to savour is the delicious prospect of Cowen being thrown out on his ear, shunned by his own party and ministerial colleagues, who are treating him like the modern-day plague on their road to electoral oblivion. So says the English Daily Mail doing a catch-up, making it very clear that 11 March is a fire sale - not a date picked by Cowan for his own tactical advantage.

One early casualty, to join the Taoiseach, is the Climate Change Bill. The Greens, who were instrumental in precipitating the election, are to lose their "baby" - the only thing they had been holding out for. It, like Cowan, is toast.

The cartoon, taken from here, is two days old - marking the turn of events and the terrifying speed of the  transition of fortunes. From victor of an artfully crafted vote of confidence, we get this wonderful picture of the wreckage of a political career. Nemesis will out - nemesis always follows, even if it takes much longer than most of us would like. We await the day when Euroslime Dave meets his.