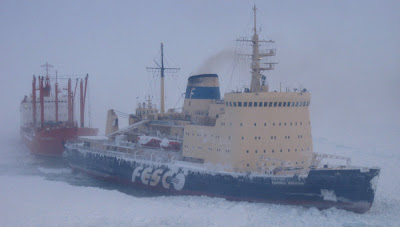 On the back of "abnormal weather " we now have a further development in the Okhotsk Sea crisis with TASS reporting "unusually strong" ice pressure. This actually comes as no surprise at all, as the wind direction and strength over the last few days has combined to create possibly the worst conditions that can be encountered.

As a result, the convoy comprising the Admiral Makarov and the Krassin icebreakers, attempting to lead out the Bereg Nadezhdy fish carrier and the Sodruzhestvo factory ship, has not moved a single mile forwards since Saturday morning. It is still stuck at a distance about 30 miles away from the areas of open floating ice, exactly where it was yesterday.

The plan devised for the rescue operation has not changed, and is now being described as "multi-stage and complicated", with the Makarov and Krassin attempting first to free the fish carrier from the ice, after which the intention is to return for the Sodruzhestvo with its 348 crew members.

Waiting at the edge of the ice are the icebreaker Magadan and the tanker Viktoria. The latter will have to refuel the two icebreakers before they start back into the ice, but it looks to be a long wait. The trapped ships have entered their fourth week of confinement, some two weeks after premier Putin suggested they might have been freed.

Suggestions are now emerging that initial efforts to free the ships were delayed because all of the icebreakers in Russia's Pacific fleet had been leased out to the oil and gas company Exxon until 2016.

A rescue operation was initiated only after the Kremlin had intervened and guaranteed payment to the appropriate parties, by which time several days had passed. Putin must now hope for a successful ending to this crisis, as loss of the ships and any men may raise uncomfortable questions about the lack of preparedness in the region.