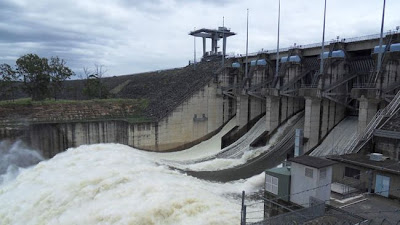 As time passes, the issues relating to the Queensland flooding begin to become clearer. But, as always, the blogs (and Booker) take the lead with the MSM trailing far behind. Posted on the Booker column is a comment from another blog, originally posted by an Australian who lives about 140 miles north east of the Brisbane River catchment, on the coast.

Of the floods that devastated Brisbane, he notes that the rain depression had formed weeks earlier and had caused disastrous floods in Rockhampton, 250 miles to the north, and caused wide spread flooding in the central Queensland coalfields.

Thus, the Wivenhoe dam management had plenty of warning that this rain was on its way and had been so for weeks. Yet the policy of the Queensland Government was to keep the dams full because of their advice from the likes of Tim Flannery et al.  This was that, because of global warming, Queensland was going to remain in drought.

What is then crucial here, we are told, is the timing. This is one of the points made by Regionalstates: it was "all inconvenient". The rains increased in the Brisbane River catchment on Thursday 6th. By Friday afternoon the spillways were releasing 8000 cubic meters a second - just a trickle for this dam. This was in order to maintain 100 percent capacity as per government policy.

Then, as we also learned from Regionalstates, no one could be contacted over the weekend of the 8/9th to make the decision to go against government policy, and open the spillways to lower the level in the dam. Thus, over the weekend, the dam went from 102 to over 144 percent in just two days - and this is a massive dam.

By Monday it was too late, the die was cast. The inflows to the dam were greater than could be released. Yet the gates should have been throttled back because of the enormous flow in the Bremer river and Lockyer Creek which join the Brisbane below the Wyvenhoe dam.

The level in the dam went to within an inch or so of having the emergency spillway plugs failing and releasing an unbelievable amount of water to save the main rock and earth fill wall. They are saying, behind closed doors, just over an inch more of rain and the dam would have failed. Brisbane would be no more.

Because of bad policy, policy makers asleep at the wheel over the weekend, the Wyvenhoe Dam did nothing to reduce the flooding in Brisbane. In all, building the dam was a waste of time if it could not be managed in the way it was designed.

If the dam had been at 40-60 percent when the rain started, there would be no flooding in Brisbane and the dam would have done the job for which it had been designed.

Perversely, straight out of the "shutting the stable door after the horse has bolted" department, water is now being released from the Wyvenhoe Dam (pictured), although levels remain at 160 percent, which is what caused the problem in the first place.

This is matched by a weasel-worded, "on the one hand this, on the other hand, that" article in The Australian, which completely misses the point about the impact of the global warming obsession on water management policy.