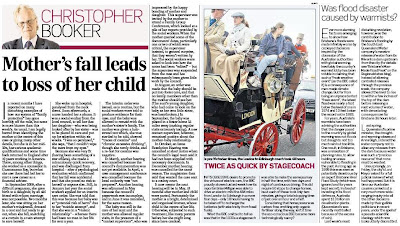 Three stories today in the Booker column, with the lead on stolen children - another ghastly story. It really is about time other media got involved, together with some input from politicians. But, as always, "solitary furrow" comes to mind.

The rest is two global warming stories, the first on the Australian floods. It might be that the theme is a little bit familiar to you. Yet it is the first airing in the British MSM, as far as I know – although the issues are being discussed elsewhere. Then there is a dig at electric cars, again a familiar theme. Online, there is another story tucked in on censorship and The Guardian.

So far, the trolls have been contained, and a trawl for items about Australia and climate change has yielded dividends. Battle will resume later today.