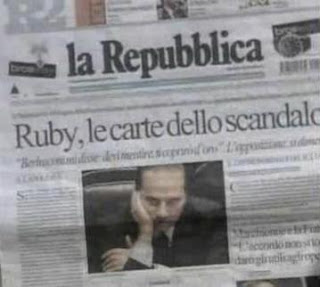 Mary Ellen Synon, despite being a fully paid-up member of the MSM fraternity, is more than a little caustic about the media in her current blog.

She has been in Rome but is back in Brussels and ready to post on EU topics such as the spread on Portuguese debt or the possibility that the EU may require in increase to 6 percent in tier one requirements or Wolfgang Schauble's insistence on more German-directed fiscal control across the EU in return for an increase in the European bail-out facility.

But, she then adds, in a comment that really hits home: "Or we can talk about the only European story in which anybody outside this euro-village is interested, which is, Silvio Berlusconi and the hookers".

That's the rub. Journalism, and the media generally, has degenerated to such an extent that it has become a parody of itself, its writers infantile, venal and largely ignorant, the output a pathetic composite of low-grade entertainment and trash. Even when they try to do serious stories, they get details wrong so often that they cannot be relied upon as sources.

It is as well to recognise that the newspapers – despite their huffing and puffing, and their clever-dick, know-all tendencies - are part of a failing industry. Equally, broadcast news would not survive without cross-subsidy and, in the case of the BBC, state-mandated taxes.

But the race to the bottom, it seems, knows no constraints. We can echo Mary Ellen's complains with some observations on the Okhotsk Sea story, of which we will have more news tomorrow. But imagine my surprise when reviewing the online coverage of the Okhotsk Sea, I suddenly find multiple entries on Google News, more than I have even seen on one day since the crisis started.

Then I find that the media is following the fate of some rare grey whales, swimming out of the Sea and into Alaskan waters. Completely uninterested in the fate of over 400 men in a life-or-death drama, give them a "fluffy bunny" story and they're crawling all over it.

It was the same over the weekend. While Booker did the hard-edge story about how the warmists might have actually caused the Brisbane flooding disaster, the Sundays – including his own paper – were largely concerned with "stream of consciousness" and human interest stories, most often conveying the experiences of survivors. Such stories have their place, but generally, they were the only fare on offer. That is unhealthy.

Today, two stories rush into print, so to speak, on this blog. First, there is the suspension of the European carbon market, after suspicions of fraud. More than €2bn (£1.7bn) of trade is likely to be disrupted after the EU commission said it would prevent transactions until 26 January.

The suspension follows allegations that 475,000 carbon credits worth €7m were stolen in a hacking attack on the Czech carbon register. It appears that the allowances were bounced between eastern European countries before disappearing without a trace.

This is the latest of such a long line of incidents and could spell the slow death of a one of the flagship (and hideously expensive) schemes devised by the EU, supposedly to combat global warming. With billions already involved, and potentially trillions over term, of our money, a major fraud on top of other major frauds, with more frauds to come, is of some considerable concern.

Such a story, in an adult world, with adult newspapers and adults for journalists, would be on the front pages. You will struggle to find it in the business pages – one of the last repositories of adult reporting. 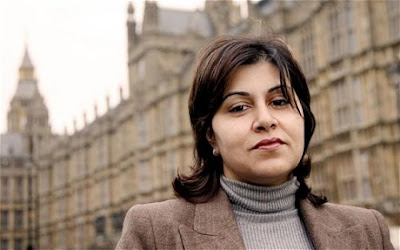 But The Daily Telegraph is currently leading on a story that has Baroness Warsi complaining that "prejudice against Muslims has become widespread and socially acceptable in Britain" because Islamophobia has "passed the dinner-table test". It is, of course, nothing to do with the fact that so many are murderous bigots, wife beaters, child molesters and ... murderous bigots.

One could, of course, say that this is a leading newspaper, and the journalists know their business. They certainly think they do, and are nothing if not opinionated. But these are not the giants of old. Let us keep reminding ourselves: these are failing businesses, haemorrhaging customers and money. They don't know what they are doing. And just in case you think they do, read this offering from the venal fools.

Thus you will struggle hard to find details of the second mega-story in our list, which we would also put on the front page – how the Irish are printing huge amounts of money, some €51 billion, or nearly 45 percent of their GDP, to shore up their banks. This is economic suicide, which is dangerous for them, the rest of euroland and us as well.

But the media – as we also saw with yesterday's raft of "Galileo" stories - don't do "serious" any more. They have lost the art, lost the skills and retreated into childhood. These are dire times, and it is virtually impossible to describe quite how bad the output is getting. We have not got time for this. These fools are selling themselves down the river, which is fine - except they are taking us down with them.