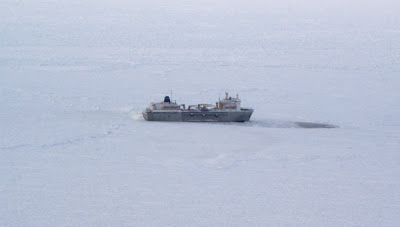 Yesterday, the Russians were talking about the rescue operation moving into the final, crucial stage, as the combined force of the two biggest icebreakers in the region moved in to try to extract the 32,000-ton Sodruzhestvo (pictured) from ice captivity in the Okhotsk Sea.

The latest report informs us that the icebreakers Krasin and the Admiral Makarov have in fact reached the Sodruzhestvo, now confirmed with 348 crew members on board, and have started to lead her out to free waters. The route has been carefully planned, after extensive reconnaissance by helicopter. The pressure is on for a number of reasons, not least because meteorologists are predicting that the weather will worsen sharply in the next two days. Winds are expected to strengthen and visibility to drop.

Significantly, the ice shelf - which was only about 15 miles deep at the start of the crisis – is now about 100 nautical miles. Distances to safety, therefore, have dramatically increased as the ice field spreads northwards. But, more worryingly, in this shallow part of the sea, the icebreakers are finding that the ice has hit bottom. 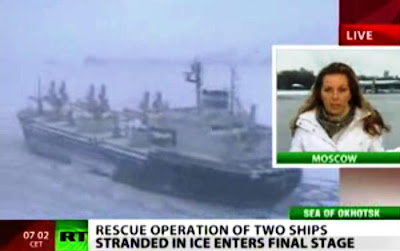 Having yesterday "parked" the fish carrier Bereg Nadezhdy (pictured above), with 35 crew on board, the two icebreakers covered 25 nautical miles in 24 hours to reach the Sodruzhestvo, breaking through three big floes in the process. Later, when the two ships are re-united, it is planned to lead them to safety in a single-file convoy of four vessels.

Russia Today talks of temperatures having dropped to -27°C and of a ferocious northerly wind, which is driving the ice into the southern part of the Okhotsk Sea, to the Sakhalin Bay area, where the ships are trapped. Higher winds in particular will intensify the difficulties. Awaiting the ships at the ice edge, we are told is the Magadan icebreaker and a tanker, ready to refuel the Makarov, which is said to be low on fuel.

Meanwhile, as this little local difficulty is sorted out, WUWT reports that nearly 70 percent of the United States is snow covered (and almost all of Canada), with New York City declaring a "snow emergency". The "big freeze" also continues in India and China, in the latter causing considerable crop losses. But nothing of this contradicts the claim by the British Met Office's Julia Slingo that the world is getting warmer. These are all local events. 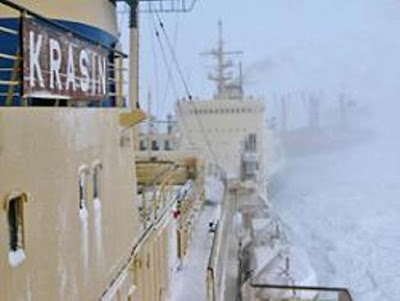 UPDATES: TASS is reporting that the operation to "pilot" the Sodruzhestvo to a loose ice area has started. But, says Tatyana Kulikova, head of the press centre of the Far Eastern sea shipping company, "The operation is proceeding with difficulty: the factory ship has large dimensions: 180 metres long and 20 metres high. It is very difficult to take it in tow."

The procedure described is that the Admiral Makarov "is busy breaking up ice to trench a channel while the higher-powered icebreaker Krasin will pilot the factory ship through it." That is a bit odd, as the two icebreakers are described as sister ships, with identical performance specifications. Meanwhile, the remarkable photograph shows what appears to be a double tow – the two icebreakers together leading out the Bereg Nadezhdy.

Ria Novosti is suggesting that the Sodruzhestvo can be extracted within 12 hours, the Krasin leading it out on "an anchor tow" (i.e., close, but not close-coupled). The vessels are said to have about 12 miles to go before they get to free water, including around three miles of the most treacherous ice. The operation is expected to be completed by Thursday afternoon (presumably Moscow time).