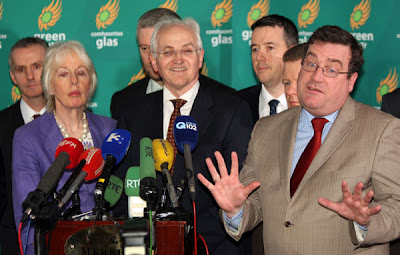 Whatever Cowen's ambitions might have been about holding on until 11 March, they seem to have been wrecked by the Irish Green Party. It has decided to withdraw from the Government after "losing patience" with the lack of resolution to the ongoing saga of Fianna Fáil's leadership.

It has been suggested that the immediate outcome of this palace coup is that the date of the election will be brought forward, with Green Party leader John Gormley (centre of pic) declaring that Fianna Fáil’s leadership issue was too much of a distraction for the Government and meant an immediate election was necessary.

An early contest, however, is still not a foregone conclusion, even though the opposition Labour Party is preparing a vote of no confidence. There is still the matter of the Finance Bill to get though, to give effect to the measures contained in the Budget and give a legal basis to the EU bail-out.

This is supported both by Gormley and his party, and the Opposition benches. Cowen is saying that it would not be possible to deal with the Finance Bill within one week, so he will not be resigning as Taoiseach. Nor will he be seeking the dissolution of the Dáil and an immediate election. And in this, Cowen does seem to have the whip hand. If he is dumped immediately, the Finance Bill goes, and Brussels would be exceeding displeased.

Nevertheless, Fine Gael's deputy finance spokesman Brian Hayes says that it is party's view, alongside the Greens, that the Finance Bill can pass all stages in both Houses in time for the Dáil to be dissolved next Friday. An election could then follow within four weeks.

The odd man out is Sinn Fein's Caoimhghín Ó Caoláin. He says the Bill should not be put before the Dáil, and is calling for an immediate dissolution. That is unlikely to happen, but the Sinn Fein stance could reap electoral dividends when voters come to deciding who will replace Cowen and his crew. Not only the government, but the entire political class is on notice.