One cannot help but observe 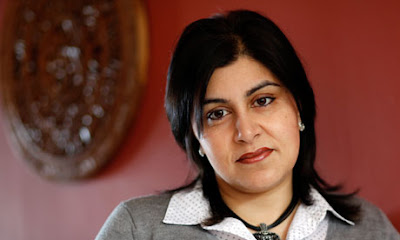 ... in relation to the singularly ill-advised speech by Warsi, that we see a follow-through piece where the stupid woman tells us that her speech was: "... not about controlling the conversations that go on in people's homes. This is about drawing a line as to the state of anti-religious hatred or bigotry in Britain today."

One wonders whether she read The Daily Mail yesterday. In that context, one also wonders what Peter and Hazelmary Bull might think of Warsi. They might suggest that the "anti-religious hatred or bigotry in Britain today" - at least from state and official sources (and especially the Church of England) - is mainly directed at Christians.

Others of us might also wonder why anyone ever thought that this woman was a Conservative, and what qualifications she might have for being made a Conservative Party chairman, other than being a female with a brown skin and an ethnic background, amongst facile, shallow politicians who are obsessed with presentation at the cost of substance.

Appointing a "token female ethnic" however, has obviously done neither the party nor her any good. She has now demonstrated that which was always going to come out eventually – she is totally unsuitable for the job. Her race and sex have nothing to do with it, though, in any shape or fashion. That matters not in the least. But one should always draw the line at stupidity. That, unfortunately, comes in all colours and sexes, as Warsi has just proved.