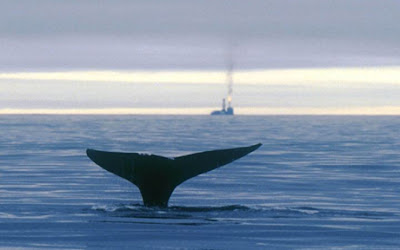 The long-running Okhotsk Sea crisis is turning into a marathon soap opera, with the latest instalment from TASS today. As expected, the storm has slackened and the snow abated, but apparently this is only a temporary break. The snow is expected back tomorrow, although the force of the depression which has dominated the region is gradually subsiding.

With that seems to come yet another plan change – or perhaps a reversion to the original plan. We are told that the two icebreakers now intend to lead the Bereg Nadezhdy ("Coast of Hope") fish carrier into clear water. Once there, they will refuel from the tanker Victoria and return, once again, in a bid to pull the Sodruzhestvo factory ship from the ice.

This time, TASS is telling us that the ships have about 30 miles ahead to reach the clear water. Estimates of distance, though, have varied wildly throughout this crisis. Figures of up to 100 miles have been mentioned. And nor is the location of the ice edge static, nor even clearly defined as the wind-driven floes continue to accumulate. It should be remembered that April is the peak month for ice extent.

Further, immediately prior to the last storm, the convoy had only made two miles in a single 24 hour period, so distance gives no indication whatsoever as to when the ships might be freed, if ever. However, as they say, "hope springs eternal" or, in this case, hope springs the "Coast of Hope" – we hope.

Meanwhile, the rest of the media, bizarrely, continue to ignore the drama, with the attention remaining on the assumed – but far from proven – adverse effect of Russian oil and gas exploitation in the Okhotsk Sea on the supposedly dwindling population of grey whales.

Latest recruit to this cause is The Tehran Times, which has copied out a Reuters report, based on a WWF press effort. Interestingly, the copy bears remarkable similarities to an earlier report by Geoffrey Lean, the Daily Telegraph's environment editor. So it is that the media are entirely indifferent to the great drama being played out in real life, preferring instead to promote the fears, real or imagined, of a conservation NGO.

But then, after the greens have so assiduously promoted the loss of drift ice in the Okhotsk Sea as evidence of global warming, the last thing they, or a warmist-biased media, would want to do is highlight a rescue drama that features abnormally severe weather conditions and a rapidly expanding ice pack.  Instead, there seems a determination amongst the warmist to downplay the drama - "move on, nothing to see here," seems to be their anxious refrain.

There is also an element here of the anti-human bias. The fate of the whales is important to these people. The potential loss of hundreds of people, on a much more immediate timescale, is of no interest. That prospect, to some, is even welcome.