Spin it any which way you like, the ships involved in the Okhotsk Sea crisis are in serious trouble. From just one source, Ria Novosti, we get the news that the Krasin and the Admiral Makarov (pictured together) are continuing with their attempt to lead the Sodruzhestvo out of the ice. But what comes over, though, is how painfully (and dangerously) slow this has become.

Towing actually started on Wednesday afternoon and, despite optimistic forecasts, soon ground to a halt when towing ropes snapped. And, although the extraction resumed on Thursday morning, since the very start of the operation the two icebreakers and the factory ship have only covered 17 miles.

They now have another eight miles to reach the Bereg Nadezdy fish carrier, which had earlier been "parked" in what was then looser ice, pending extraction from the ice field.

But such have been the delays that, in the sub-zero temperatures which have dropped to -27°C at time, the ice field has extended and thickened, and it will be now a best part of 100 miles before the ships reach clear water. And in between, there is "a very difficult stretch of ice floe", according to the fisheries company spokeswoman, Tatyana Kulikova.

Once the Sodruzhestvo is reunited with the Bereg Nadezdy, the plan is for the icebreakers continue towing the factory ship, while the fish carrier will attempt to sail on its own along the channel cut in the ice by Admiral Makarov and Krasin. 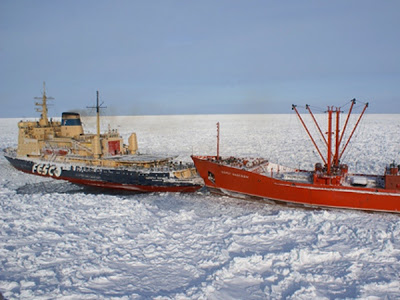 This is not much of a plan, considering that, to get her this far, the Makarov had to resort to a close-coupled tow to extract the Bereg Nadezdy (pictured above). But, given the resources available, they really do not have much option. With the added complication of the Makarov being short of fuel and weather conditions in the area deteriorating rapidly, it is no exaggeration to say that this rescue attempt is in serious trouble.

On the plus side, the Russians are enormously skilled and experienced in ice navigation, and there seem to be enough helicopter assets in the area to effect an evacuation if need be, so the continued protestations that no lives are at risk is probably true. But whether either of the two commercial ships will ever get clear of the ice remains to be seen.

UPDATE: As of 10:30 am Moscow time, TASS reports that the convoy comprising the Admiral Makarov, the Krasin and the Sodruzhestvo has been reunited with the "drifting" Bereg Nadezhdy.

The Admiral Makarov cleared a two-mile strip in the afternoon and returned to the convoy. Now, the coordinating staff led by deputy transport minister Viktor Olersky is "analysing weather and ice conditions for elaborating the tactics of the further operation." With bad weather forecast for a week, no estimate has been given for when the ships will break completely free of the ice.