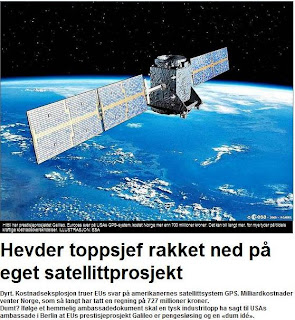 The story has been floating about for just under a week, having been first run by the Norwegian paper Aftenposten on 13 January. AFP picked it up the same day and it was planted on some websites, but it took until yesterday for the MSM to play it big. It is in the print editions today, which means it's taken the British media a week to get stuck into it.

I've had the story for the week but, in a moment of charity, gave it to a contact in the hope that he could exploit it with the media. It got no further than England Expects - which is good enough, but not what I had hoped for. But then, the British media has been notoriously slack, over the years, when it comes to reporting on this project.

The basic story should have got wide coverage – far wider than it did. It involved a man called Berry Smutny, the head of a German firm, OHB Technology. He was working on the EU's Galileo satellite navigation system, being built as a rival to the US GPS system, and had called it a "stupid idea" being pushed by France for military reasons.

This comment was in a leaked US diplomatic cable, sent in October 2009 from the US embassy in Berlin and obtained by WikiLeaks. It was then picked up and released by Aftenposten.

Smutny, whose firm had been jointly awarded a €566 million contract to develop 14 satellites for the system, had condemned the project as "a waste of EU taxpayers' money championed by French interests." He claimed the EU desire to develop a redundant but alternative to GPS was "spearheaded by the French after an incident during the Kosovo conflict when the US military 'manipulated' GPS to support military operations."

Since this time, he said, France had aggressively corralled EU support to invest in Galileo development - in order that their missile guidance systems are free of any GPS reliance. Smutny added that the irony for German investment in Galileo is that some of France's nuclear missiles are aimed at Berlin.  More to the point though, much precision-guided conventional ordnance relies on GPS, and that is where the money and power is.

We hardly needed Wikileaks to tell us this, of course. Former defence minister Michèle Alliot-Marie admitted the French military involvement in December 2004, more than six years ago now.  Even then, she was stating the obvious. We had by then worked that out for ourselves.

This and much else have remained unreported, with us having to endure endless lies from the EU, faithfully parroted by the British government: Galileo was a civilian system and had no military applications. The military dimension has been almost completely ignored by the British media and such is its venality (shared by much of the European press) that it only starts taking an interest in Galileo when it can be linked to the "tee-hee" drivel from Wikileaks.

Thus, what has driven the current interest is not the issue itself, which is far too "boring" for wuzzies in the London editorial offices. What gets them throbbing with excitement, as it always does, is that the story now has a "human interest" component. Smutny has been suspended from his job for being so candid, and it is that which gives it "legs" - Wikileaks has claimed a scalp, and the luvvies love it.

That Smutny has lost his job in itself tells you something. The euroslime can commit all sorts of indiscretions and rob the taxpayer blind, yet they get to keep their jobs. But one word against the EU's spendthrift vanity project and you are out on your ear.

Adding a little meat to the story, though, is an intervention from the EU commission. It is telling us that it needs another €1.9 billion on top of the supposed €3.4 billion already spent, in order to complete the project.  But this only gets a look in as padding, because the wuzzies have got their human interest "hook".

Needless to say, both estimates are what are known in the trade "horse manure" – as we have already observed on this blog, many times and many years ago. The EU has spent far more than €3.4 billion, as sums have been secreted through national budgets and the EU's multi-billion research budget. On top of that, the European Space Agency has been pouring in money via the back door.

As to the €1.9 billion to finish the job, this is so unrealistically low that one could easily dismiss it as fantasy or incompetence on the part of the EU commission. This, however, is not the case. It is not incompetence but another deliberate, structured lie, on top of a raft of deliberate, structured lies, where the commission has misled the public about the nature of the project and its cost. 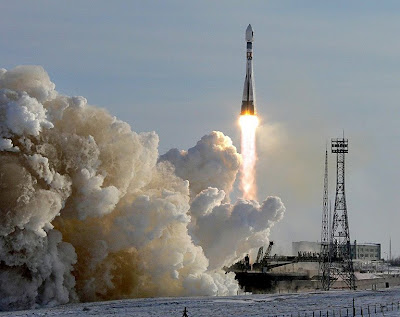 This was a project that the commission originally told us would cost €1.1 billion of public money. It then gave a solemn guarantee in the year 2000 that no public subsidy would be needed after 2007, when the system was supposed to be up and running. Four years down the line from then and it is nowhere near - the latest fiction is 2014 ... in your dreams.

At the time, of course, the commission was hoping for €2.5 billion of private investment, but when that arrangement fell through (largely because of the totally unrealistic projections for cost recovery), the whole of the development costs were dumped on European taxpayers. The British have paid a substantial share – probably in the order of about £1 billion so far, over and above normal contributions - although it is difficult to be exact. The euroslime, as always, cook the books.

To ask merely for another €1.9 billion, though, is to perpetuate the lie. In January 2008 a secret report leaked from the German government, long before Wikileaks was in business, estimated the total development and deployment cost could rise to €10 billion. But, given that the US is having to pay about €5 billion just to upgrade its GPS system – which has long been in operation – even €10 billion looks wildly optimistic.

Smutny himself told US officials that in his opinion the final cost would balloon to around €10 billion, yet the commission is still playing its dire game of underestimating the total cost.  The strategy is then to come back for more, in dribs and drabs, applying moral blackmail at each stage.

The story thus far, which we have been covering since the very start of this blog back in 2003, has given us a unique insight into this project, and we have been consulted widely (and quoted) by the foreign media. But the blog, and this issue, has been largely ignored by the British media, even when I produced the Bruges Group pamphlet on the system in July 2004, stressing the military dimension.

Unsurprisingly, therefore, for its comment in today's paper, The Daily Telegraph this time goes to Open Europe, which has just woken up to the current developments. Its director, Mats Persson, comes up with the incredibly lame observation that Galileo "is a textbook example how not to run a technology project", all on the back of a series of weak, derivative pamphlets, such as this. Not least, they seriously downplay the military dimension.

The point about Galileo as a "technology project" though, is that, had the commission been open about the costs and the problems from the outset, it would never have been approved. Hence, it has been quite deliberately built on a foundation of lies. A "textbook example of how not to run a technology project," therefore, doesn't even get close to describing this raid on taxpayers' funds. It is nothing short of corporate theft.

For the moment, though, the Cleggerons are going through the motions of being appalled by the costs, and will put up a token resistance.  But after the posturing, a formula will be devised, through which the EU will end up getting its money. The project will go ahead - no way are the British going to be allowed to stop it, and Euroslime Dave wouldn't want to anyway.

But what is absolutely crucial to appreciate is that Galileo never was a "technology project", per se. It always was and is a military project. And French military ambitions are staked on getting it through. But there is also a very strong commercial element - for the French.

An independent satellite positioning system is vital to underpin French sales of military technology to China. That is an issue which has come up again recently, with the EU (i.e., the French) seeking once again to lift the arms embargo on China which, by no coincidence, is a co-funder of Galileo, alongside India and Israel. The French can't sell current military systems that rely on the American GPS, as the signal can be shut down or degraded if US interests are threatened.

Despite this, you will not see the media put two and two together. Not even the great Daniel Hannan will tell you anything about it. He prefers to parade his ignorance on the subject, preparatory to us getting screwed once again. Even now, he is back in full flow, missing the point entirely and revelling, as do all the chatterati, in the "delicious" WikiLeak "revelation". That is all these fools can see, and that is why the French have found it so easy to pull the wool over our eyes.

We are sheep being led to the slaughter and all the stupid little wuzzies can do is titter over Wikileaks.