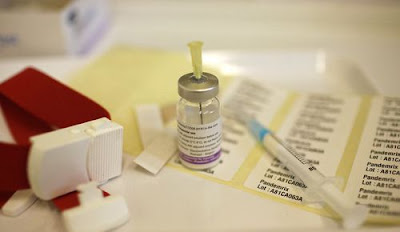 An almost certain way to ensure that a subject gets nowhere near the MSM is to have a committee of MEPs look at it. That has proved to be the case with the EU's "disproportionate" response to the outbreak of the H1N1 (swine flu) virus in 2009-2010. Despite the press release and the full resources of the EU parliament press team, the only newspaper we can find that has carried news of the investigation is the Sophia Echo.

The issue is now the subject of a resolution adopted by the EU parliament's public health committee, addressing the cost of vaccination programmes and relative risks that were faced. MEPs criticise the EU commission and member states for their "disproportionate" response and their ill-co-ordinated vaccination programmes .

The criticism arises from differences in vaccination schemes in various EU, the excessive expenditure on vaccines, "the potential influence of pharmaceutical companies in response processes," and the conflicts of interest. Billions of euros were spent in total, yet H1N1 had caused 2,900 deaths in Europe by April 2010, compared with 40,000 for seasonal flu in a moderate year.

This is an issue we looked at a number of times, most notably here, but we also looked at the attempts to highlight the way the World Health Organisation and other public health bodies had "gambled away" public confidence by overstating the dangers.

At the time, of course, this was a classic scare, obviously so, and we said as much. Yet, while this has been latterly recognised, not least now by this MEP committee, none of those who succumbed to an expensive and damaging panic seem to be able to recognise the similarities in the dynamics of the global warming scare.

What also deserves comment is the way the public authorities - so quick to spend our money on their "moral panics" as they are sometimes called – are less enthusiastic about examining the results of their folly, and learning lessons from it. To that effect, we should offer one small cheer to the EU parliament, although the motivation here was to have a pop at "big pharma" rather than the thought that they might do something useful.

So it is that this one is going to get away – billions spent, and no real lessons learned. What makes me think that, once the global warming scare collapses, we will be faced with exactly the same thing?