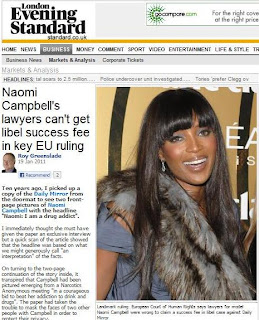 In an issue that directly affected this writer, and should concern every right-thinking person, The Evening Standard today runs perhaps the best account of an important ruling from the Court of Human Rights. It is written by Roy Greenslade, professor of journalism at the City University London.

Before turning to the issues, however, one must note the headline, "Naomi Campbell's lawyers can't get libel success fee in key EU ruling", and perhaps share Greenslade's embarrassment – as he bears no responsibility for it, and will not have seen it until it was published.

The point here, of course, is that the Court of Human Rights is not an EU institution, but time and time again we get ignorant – to the point of stupid –newspaper staff (usually sub-editors) writing these headlines, which are plainly and obviously wrong.

Yet, for all their famed fact-checking and the rest, they not only get it wrong, but continually get it wrong, entirely impervious to any attempts to correct them. No wonder the press is a failing industry – it is staffed by low-grade morons who do not know their proverbial arses from their elbows and, more dangerously for them, seem incapable of learning from experience.

Talking about low-grade morons, that brings us to the real target of this piece, George Monbiot (aka Moonbat – but "ocean-going shit" will also do), who took such rabid delight in our problems with The Sunday Times and latterly The Sunday Telegraph.

It was this latter newspaper which caused Booker and I so many problems for withdrawing the article we wrote and offering a lame non-apology to that galactic-sized shit Rajendra Pachauri, for us daring to tell the truth about the crook.

It was then that I noted that, using the biggest crooks in the libel business, known to Private Eye readers as Carter Fuck, Pachauri had done a "no-win, no-fee" deal, known technically as a conditional fee arrangement (CFA). This, with a special insurance scheme introduced under the last administration, enables excrement like Pachauri to go to law and stack up colossal fees. Says Greenslade:


CFAs have proved to be enormously controversial since their well-intentioned introduction more than a decade ago. They were supposed to offer people who could not afford legal fees access to justice. They would, for example, be able to pursue libel actions (which are not covered by legal aid).

Increasingly, however, they have also been used by people wealthy enough to pay lawyers including "celebrities". Even that wouldn't be a problem, but it is the way in which CFAs operate that has alarmed news organisations.

Without labouring over the arcane details, a CFA allows a solicitor to charge a client the usual fee plus, if the case concludes in victory, an uplift known as a "success fee". These can amount to 100% uplift on the regular charge. There are many other factors, such as insurance to protect clients from heavy legal costs should they lose, but let's not go there.

Recently, I then noted, Carter Fuck had represented a minor celebrity in a libel case, gaining £15,000 in damages – for which they had charged £350,000 costs. In matters of detail, I got that wrong – but I was relying on an MSM journalist for my source.

The damages were actually £3,500, paid to Naomi Campbell, and the legal costs totalled £1.1 million, which included a success fee of £280,000. Needless to say, the event was hailed by the odious Carter Fuck as a "victory for privacy". The Daily Mirror, which had to pay the costs, however, was "outraged". And, Greenslade tells us, it's fair to say, the outrage was shared by publishers, editors and newspaper lawyers from every newspaper.

Actually, there was more than "outrage" – there was fear as well. As I wrote in respect of The Sunday Telegraph, the difficulty facing the paper was that, when having to deal with an unethical law firm which has been given a writ to stack up open-ended costs, going to law to fight even a good case can be perilous and expensive. Even a win stands to cost several hundred thousand pounds, in your own costs. If you lose, the costs can run to millions.

Faced with this blackmail, I wrote, it is easier for the newspapers to cut their losses. Which is exactly why The Sunday Telegraph offered its "non-apology". The risks for newspapers going to law, or defending their own journalists, had become prohibitive. We were hung out to dry by the newspaper in which we had placed our trust.

Anyone with an interest in maintaining free speech and the freedom of the press was appalled by this development and, interestingly, The Guardian was as much concerned by the effects of the Naomi Campbell judgement and CFAs, with its editor Alan Rusbridger going public on the issue. But that didn't stop Guardian columnist Moonbat making hay, capitalising on what his own boss had complained was challenging any "reasonable notion of free expression".

However, as we have come to learn, greenies like Monbiot are not in the least interested in the concept of free speech – and neither are his troll friends, who jabbered with excitement when The Sunday Telegraph caved in to the crook.

But this judgement, which now effectively outlaws "success fees", redresses the balance slightly. It makes it much less likely that newspapers will have to cave to blackmail pressure and puts Moonbat back in his hutch where he belongs.