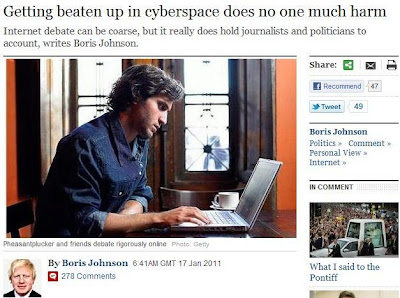 I had intended to ignore the latest Boris Johnson effluvia - not unusual for me, as most readers know I am not a fan. His much vaunted "intelligence" is, I believe, grossly over-rated. Too many people, in my view, mistake low cunning, honed by years in a political environment, for intelligence.

However, numerous e-mails and other contacts, plus an analysis on Witterings from Witney persuaded me to look at it, as it addresses the vexed question of the comments sections on The Daily Telegraph. It appears that the anarchy, ill-temper, and outright trollery that we experience is considered acceptable by Johnson, but approval of any such view should be tempered by several consideration.

Firstly, and rather unfortunately, Johnson displays his usual quotient of ignorance, confusing the "blogosphere" with the "commentariat". The man refers to the comments by the former and actually believes that the low-grade comment section to his articles is part of the "blogosphere". As an aside, the confusion, in itself, is so fundamental that it merely demonstrates why, as a commentator, Johnson is a waste of space - not worth the time spent reading him.

More crucially, Johnson might find the anarchy on his comments acceptable, but then he so rarely writes anything which merits a sensible comment that one can understand his relaxed attitude. But the fact of the matter is that the newspaper's comment sections are unmanaged space. Most of the postings are the equivalent of graffiti and litter found in an unloved council tower block in some inner city estate.

The management, unwilling to fund proper moderation, have outsourced the function, where they are subject to the lightest touch by contract staff who have neither the time nor the commitment to do anything effective.

That is not to say that we need to go down the route taken by The Guardian with its Komment Macht Frei and other web pages. In their own way, they have made just as big a mess as the others, applying excessive control. But there is a need to allow entertaining and readable comments, without their being drowned out by trolls, idiots and spammers. Intelligent and sensitive moderation is needed.

Strangely, on the blogosphere, we tend to manage things better – but the reason is probably that The Telegraph management wants it both ways. They want the traffic, to maximise their advertisement income, but they are not willing to plough some of the money back into managing and developing the space.

On the Booker column, however, it has left us near despair, as the trolls attempt to hijack the space and dominate the discussion, creating as we remarked earlier, a very significant problem. And, despite the buffoonery of Johnson, it is a problem and will remain so. Privately, The Telegraph management – and especially their ever-so-clever website managers - have admitted defeat. They have waved their piece of paper and ceded the space to the trolls.

So, instead of action, they wheel out Boris Johnson as the apologist, to make a few inane comments, tempered with his usual brand of buffoonery – which does not conceal a higher intelligence – and then consider their readers well served. But look hard at the comments and you will see that, despite the massive numbers, the actual number of people posting is very small, with a large proportion being trolls.

And that is why the MSM is going downhill. They can't even manage their own webspace.