Back to the Nursery 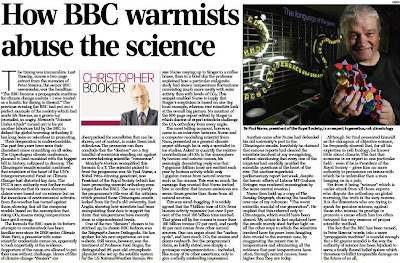 The most telling moment came in an interview between Nurse and a computer-modelling scientist from NASA, presented as a general climate expert although he is only a specialist in ice studies.

Asked to quantify the relative contributions of CO2 to the atmosphere by human and natural causes, his seemingly devastating reply was that 7 Gigatons (billion tons) are emitted each year by human activity while only 1 Gigaton comes from natural sources such as the oceans.

This was so much the message they wanted that Nurse invited him to confirm that human emissions are seven times greater than those from all natural sources. This was mind-boggling. It is generally agreed that the 7 billion tonnes of CO2 due to human activity represent just over 3 percent of the total emitted. That given off by natural sources, such as the oceans, is vastly greater than this, more than 96 per cent of the total.

One may argue about the "carbon cycle" and how much CO2 the oceans and plants reabsorb. But, as baldly stated, the point was simply a grotesque misrepresentation, serving, like many of the programme's other assertions, only to give viewers a wholly misleading impression.

Thus, for all Nurse's triumphalism, it is very clear that he does not have the first idea of what he is talking about. Yet, in the name of science, this man is happy to call out Delingpole and tell him he is wrong. The contrast is highly revealing – Nurse has no place in a proper debate on climate change. He belongs in a nursery.