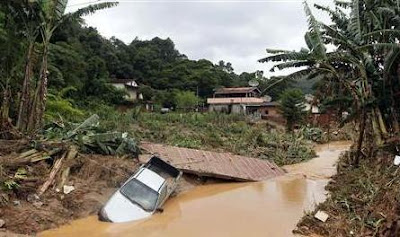 Without the wealth or the attention that Australia is getting, the scale of the human disaster from the floods is in fact far greater. Rescue workers are struggling to reach the areas cut off by devastating floods and landslides, with at least 375 people having been reported killed in what is being described as "one of Brazil's worst natural disasters in decades".

According to the Reuters report, torrents of mud and water set off by heavy rains have left a trail of destruction through the mountainous Serrana region near the city of Rio de Janeiro. Houses have been toppled and roads buckled, burying entire families as they slept.

"It's like an earthquake struck some areas," said Jorge Mario, the mayor of the Teresopolis municipal area, where at least 158 people died. "There are three or four neighborhoods that were totally destroyed in rural areas. There are hardly any houses standing there and all the roads and bridges are destroyed."

This is, of course, not the first time in recent history we have reported on floods in Brasil, most recently in July 2010 and before that in April 2010. Yet this was the region – like northern Australia – which was supposed to be stricken with drought, and is now suffering from torrential downpours.

In fact, as we were writing in March 2010, drought is the least of the country's problems, as la Nina-induced climate patterns currently dominate the region. But, even the walls of mud and water currently destroying lives and property are not as dangerous as the walls of ignorance erected by the warmists.

Weather we can deal with. Stupidly is an altogether different proposition.