Crises in the East 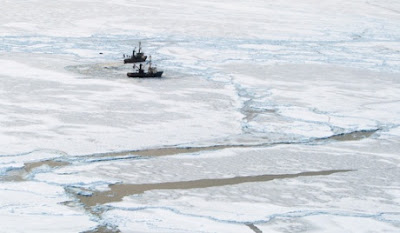 Since 30 December, Russian ships have been trapped by ice in the Sea of Okhotsk, part of the Gulf of Sakhalin, and rescue attempts have so far been frustrated. The drama, redolent of the 1983 ice crisis, apparently involves ten ships, including a research vessel and what are described as three "fishing boats". With crews totalling 400, it is more likely that these are factory or processing ships. 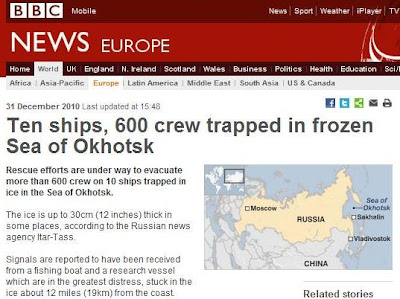 The BBC report, claiming to cite the Russian news agency TASS, refers to ice of 12-inch depth – which seems unlikely. Ice hardened ships, which would be needed in these waters, can usually handle up to three feet (1 metre) of ice. Sure enough, the TASS report talks of ice approaching two metres thick, with the icebreaker Magadan (pictured below) struggling to reach the trapped ships. Such is the density of the ice that it had to halt four miles away from the vessels. 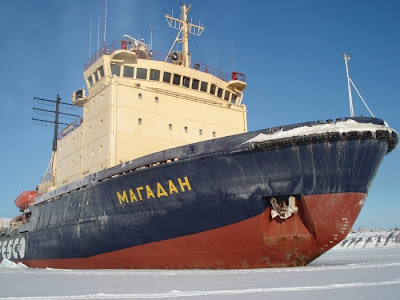 According to a second report by TASS, Magadan will be joined by the Admiral Makarov icebreaker, one of the largest in the far eastern icebreaker fleet. Rescue operations will then resume, scheduled for 4 January. No lives are said to be at risk. Currently, temperatures are reported down to -22°C and the extent of ice has clearly caught the Russian by surprise – and indeed the thickness, as the Magadan has been unable to cope.

Separately, but in the same general region, Japan Times, via Tom Nelson and UPI are reporting record snowfalls in Japan. Members of the Self-Defence Force had to be drafted in to help clear a huge New Year's Eve traffic jam in Tottori Prefecture involving about 1,000 vehicles. A local express train was stranded between stations and was rescued only after a 34-hour wait, with about 130 passengers on board.

Record snowfall in region on the Sea of Japan coast forced about 1,200 people to ring in the New Year aboard stalled trains.. Others were not so lucky. In Daisen, an 82-year-old woman buried by a rooftop avalanche Saturday afternoon died after the ambulance took about five hours to arrive after being summoned by her family.

Other roads have remained closed throughout today, including one where about 300 trees were found to have collapsed over a distance of about five miles because of the weight of the snow. According to a local meteorological observatory, three feet of snow had accumulated in Yonago, the most since 1940. 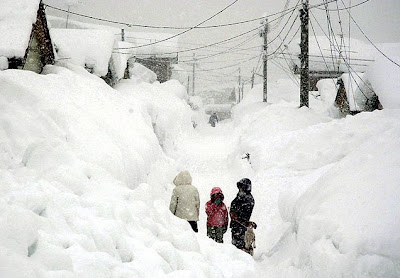 Previously, the heaviest snow in recent memory was in January 2006, the picture (above) showing children making their way along a street in the city of Iiyama in Nagano Prefecture, Japan. Then, over 100 people died in weather-related incidents.

The extremes of temperatures, icing and snowfall in the Far East give a lie to British Met Office scientist Julia Slingo's claim that recent bad weather in the UK and Europe were localised, and that global warming was proceeding apace. With heavy snowfall in the United States, and in China and Mongolia, the extent of cold conditions has now spanned the northern hemisphere.