The cavalry rides to the rescue? 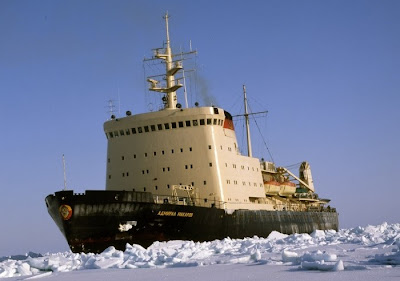 We may (or may not) be coming into the last phase of the Okhotsk Sea drama with the arrival of the 15,000-ton icebreaker Admiral Makarov on station, ready to help rescue the trapped ships (pictured above).

The icebreaker Magadan is already on station and so are the ice-class tugs Irbis and Predanniy, dispatched to the rescue by the Maritime Rescue Coordination sub-center Yuzhno-Sakhalinsk. But what has not been made clear from the reports is the scale of this operation, as one of the trapped ships is by no means an ordinary vessel.

Originally described as "fishing boats" with crews totalling 600 in a BBC report, latterly we have seen three main vessels trapped, with about 400 people, described as the floating platform "Commonwealth", the research vessel the "Professor Kizivetter" and the refrigerated transport ship "Coast of Hope ". (And there may be two more - 1,300-ton trawler, Mys Yelizavety, which is less than half a mile from shore with 78 crew on board, and a trawler with a crew of 25, which also became trapped on Monday).

However, as best we can establish, the three main ships are the Sodruzhestvo, the 13,000-ton refrigerated fish carrier Bereg Nadezhdy and indeed the fisheries research ship Professor Kizevetter. 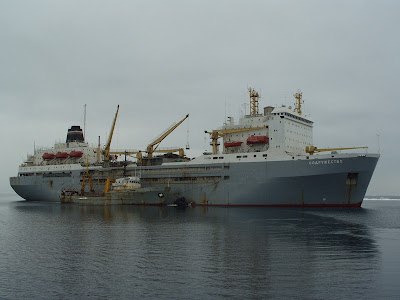 The one to watch is the Sodruzhestvo (pictured above - the name means "friendship" or "alliance"). Still being called a "fishing boat" by the financially well-endowed but intellectually impoverished BBC (and joined in that by ITN News), she is actually a huge floating crab canning factory.

Built in Finland and commissioned in 1989, together with sister ships Petr Zhitnikov (pictured below) and Vsevolod Sibirtsev, this 32,000-ton giant and its sister ships have no parallels. Each can carry a crew of up to 520 (although only 320 are reported aboard the Sodruzhestvo at this time) and are able to process enough seafood each day to fill up to 350,000 cans. 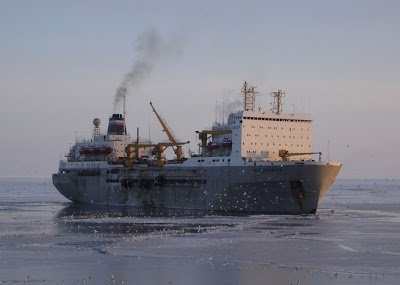 The ships are ice-hardened and are used to working in Arctic conditions. They are big enough to weather all but the most furious of storms. For the Sodruzhestvo to have been caught out, therefore, conditions must have been exceptionally severe – strengthening the suggestions that we are beginning to see a dramatic turnaround in the weather in the region.

Despite its size and power, the Admiral Makarov will have its work cut out rescuing the Sodruzhestvo. In the exceptional conditions prevailing, where the sea is so cold that the ice closes immediately behind an icebreaker, the Russians have developed a technique called the "close coupled tow", where the following ship is lashed directly to the icebreaker's stern.

This, though, is a hazardous manoeuvre and often damaging to the towed ship, which is literally dragged through the ice. Moreover, it has rarely if ever been tried with a ship the size of the Sodruzhestvo. Thus, while the cavalry have arrived, the drama may not yet be over.

And, working on the basis that the danger is never so acute as when politicians publicly offer reassurance, the situation looked more serious later this afternoon when Putin made a telephone call to the crew of the Sodruzhestvo, promising them "quick help", telling them that the icebreakers would not reach them until tomorrow, when a break in the weather is expected.

Much more of that and they are quite obviously doomed.