The heroes of not long ago 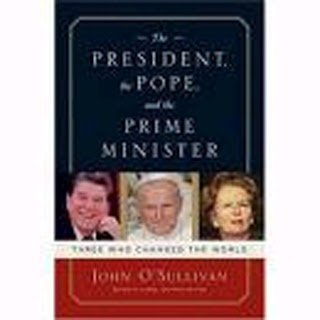 Sometimes it is hard to believe that my generation can recall a time, not so long ago, when the United States had a great President, the United Kingdom a great Prime Minister and the Catholic Church a great Pope. As it happens, I am an admirer (without being a Catholic, so no accusations of conspiracy, please) of the present Pope and think that the Catholic Church will probably do well under his leadership. I have less faith in the incumbents of the other two positions.

John O’Sullivan’s book “The President, the Pope and the Prime Minister”, subtitled “Three Who Changed the World”, published last year in the US is now available in Britain. It covers the last years of the Cold War, the period when, with extraordinary fortuity, the West was led by three giants.

There is, as O’Sullivan points out in the book (and did so again at the British launch last week), a curious parallel between the three. For various reasons they and all around them were convinced that they would not be able to reach the top position in their chosen field for somewhat peculiar reasons. Partly the reasons had to do with age (Reagan) or sex (Thatcher) but partly it was because they were too much of what they were supposed to represent. Reagan was “too American”, Thatcher was “too Conservative” and Karel Wojtyla was “too Catholic”. Not much room for the middle ground there. 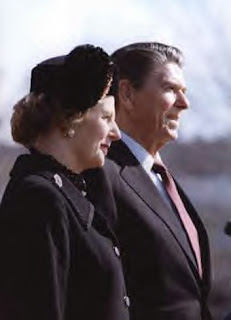 The three achieved their positions of power and responsibility within a relatively short time. Karel Wojtyla was elected to be Pope in October 1978 and took the name of John Paul II; Margaret Thatcher was elected in May 1979 becoming Britain’s first woman Prime Minister on May 4; Ronald Reagan was elected in November 1980, taking office in January 1981.

There were other parallels, not least the fact that all three narrowly escaped with their lives in assassination attempts. John O’Sullivan describes what might be viewed as a series of coincidences, though he chooses to see it otherwise at the beginning of Chapter Three, entitled “Did God Guide the Bullets?”

If life were a supernatural thriller, the next plot twists would have been expected. Twenty-six months separated the elections of John Paul II and Ronald Reagan, and Margaret Thatcher began her premiership roughly in between. Fewer than three months (to be precise, seventy days) separated Reagan’s election and the attempt on his life by John Hinckley on March 30, 1981. John Paul II narrowly survived an attempted assassination a mere forty-three days later, in May 13. And three years later Thatcher escaped unharmed when an IRA bomb intended to kill her exploded in the Grand Hotel in Brighton on October 12, 1984, killing five people and wounding many others, including her close friend and ally Norman Tebbit.

There is an almost cinematic neatness about this series of crimes. In The Omen or The Exorcist they would be readily explained as the forces of Satan seeking to destroy the apostles of hope before they could do too much good (though a more formulaic film director than God would have insisted that Satan move his attempt on Thatcher’s life up to 1981). This slightly eerie impression is reinforced by the extraordinary narrowness of the escape of all three intended victims. At least two of those intended victims believed that God had intervened to preserve their lives, and guided their later action by the light of that belief.

Assassinations have sometimes altered the course of history; the First World War arose from one. On these occasions, it was the failure of assassination that may have altered history. 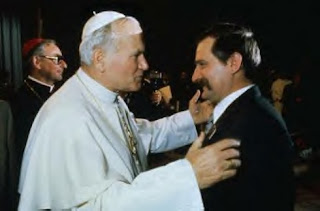 The book traces the preceding and subsequent careers of the President, the Pope and the Prime Minister, laying special emphasis on the Cold War and the fight against the Soviet Union with its many tentacles. It is worth reading this book if only to remind oneself of the many, seemingly disparate problems, crisis, upheavals and wars, that were, in reality, caused by the activity of the Soviet Politburo and its minions in various countries.

It is, as it happens, worth reading the book, anyway. Some time ago, on another site, I described it as the “must-read” for all conservatives. Actually, it will be the “must-read” for all those who are interested by the way the Cold War was won (even if we do seem to be losing the peace) and to whom the ideas and ideals of the West are dear even when the actual events seem to be going the wrong way.

The story weaves its way through public and private events, relying on written accounts and personal reminiscences, not least those of O'Sullivan himself, former Daily Telegraph journalist and former speech writer to the Iron Lady. In case we have forgotten, there is a good deal about the sheer venom that all three had to suffer from throughout the years of political power and, in the case of Reagan and Thatcher, afterwards. The whirligig of time brings its own. Who will remember all those silly snobbish comments about Thatcher being a grocer's daughter and, therefore, rather vulgar or Reagan being nothing but a second-rate Hollywood actor (which is untrue in itself - he was much better than that)?

One of the extraordinary aspects of this book, and it is a tribute to the author, is that I found it an exciting read, despite remembering very clearly all the major and many of the minor events described in it. What is going to happen next, one keeps asking oneself, while knowing full well the answer.

Let me quote some words of Ronald Reagan’s (observant readers of this blog know that I am something of a fan of his) from the speech he made to a group of World War II veterans at Pointe du Hoc, on June 6, 1984:

Here in this place where the West held together, let us make a vow to our dead. Let us show them by our actions that we understand what they died for. Let our actions say to them the words for which Matthew Ridgway listened: “I will not fail thee nor forsake thee.”

Strengthened by their courage, heartened by their valor, and borne by their memory, let us continue to stand for the ideals for which they lived and died.

Who could put it any better? As it happens, one of the Great Three is still around and was present at the launch, looking extremely well in a purple outfit, ready to talk to anyone who wanted to and equally ready to sign the book for anyone who plucked up courage to ask. (Oh yes, the author did get a look-in.)

It is, I cannot help feeling, up to us to ensure that the legacy of the President, the Pope and the Prime Minister is not dissipated. Yes, I know, the first question that will be asked is "who is this we, paleface".
Posted by Helen at 16:22