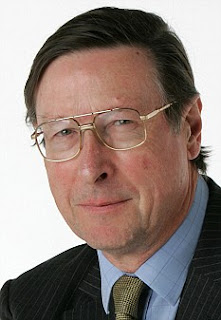 I have mixed feelings about Max Hastings. I only met him once, and he seemed more than a little remote (which is one way of putting it). My feeling was as if I had become the sort of substance one scrapes off the bottom of one's shoes.

Nevertheless, I have read most of his books and still regard his "Overlord" as the best written account of the 1944 Normandy campaign – not that he was "there" of course. Others of his books are not as good and, with many of his contemporary opinions, I profoundly disagree.

Even then, as with other commentators – some of whom one instinctively distrusts – Hastings occasionally writes something which makes you sit up and say, "Yes! You are right!", even if only because it accords with one's own thoughts and prejudices.

In The Daily Mail today is one of those pieces, this one headed: "Thatcher's legacy - and why America is falling out of love with Britain all over again."

Hastings takes the scenario of how the extraordinary transformation wrought by Mrs Thatcher – the victory in the Falklands War, and the prosperity of the past 20 years – caused American respect to Britain soared. We achieved recognition as a remarkable comeback story, a reliable supporter on the world stage, an important player among second-division powers.

Thus, asserts Hastings, for the past quarter-century, the British have been able to hold their heads high in America. The future, though, looks different. Britain is understood here to be the worst casualty of the economic crisis in the developed world. It is plain that our success and apparent wealth of recent years have been much overstated. Then comes the bombshell.

Beyond our economic woes, we are told, it is dismaying to hear sharp criticism in Washington of the British contribution in Afghanistan. We think we are trying pretty hard - spending £3billion a year and accepting a steady drain of casualties in the battle for Helmand province. Yet many American soldiers and strategists are unimpressed. Hastings continues, a section worth quoting in full:

'The British Army is not the force it was 20 years ago,' claims a U.S. general who has held a senior command in Afghanistan. 'It is casualty-averse and lacks boldness. It is too ready to call in air support rather than "mix it" with the Taliban. I would describe most of the British commanders and officials involved in Afghanistan as defeatists.'

I reeled before this barrage. I told the general that the British Army thinks it is making a pretty impressive effort in Afghanistan. Indeed, the British soldiers who have striven so hard in Helmand, and have paid so heavily in casualties, are doing everything that could be asked of them.

Our Government faces special problems because the war is unpopular at home. This is why Gordon Brown last week rejected the Army's case for sending 2,000 reinforcements out there.

My American friend, however, returned to the assault. He said: 'You people kid yourselves that the Afghans like you. They don't. They tell us that you behave towards them with imperial condescension. They say your soldiers treat Afghan soldiers as if they come from a lower caste.

This last charge was echoed by a civilian strategist I met, who also has a lot of Afghan experience. I suggested that the Afghans tell all foreigners what they think they want to hear. British soldiers hear bitter criticism of the U.S. Army, and especially of its carelessness about civilian casualties.

But it seems to me less important whether the allegations against us are justified than that a substantial body of Americans believes them. No one in Britain should fool themselves about the US attitude to our withdrawal from a combat role in Iraq, marked by a ceremony outside Basra last week.

The Americans perceive the British Army as having suffered a defeat. They see us as leaving southern Iraq with our tail between our legs. Contempt for our showing there increases scepticism about what we are achieving, or not achieving, in Afghanistan.

… I was shocked by the vigour of criticism of our performance on the ground by influential people in Washington, both in and out of uniform. If you read any of the half-dozen most prominent American books published about Iraq and Afghanistan during the past year, you will discover that the British are mentioned only in a few sentences, most of these unflattering.

If there is one thing more depressing than being engaged in a tough, maybe unwinnable war on the other side of the world, it is receiving a 'C' grade from our senior partner for our part in it. I believe that we must keep trying in Afghanistan, not least to demonstrate our support for the U.S. But we should not fool ourselves about our standing in American eyes. Economically, politically and militarily, Britain does not look impressive.

The key assertion is, of course: "The Americans perceive the British Army as having suffered a defeat. They see us as leaving southern Iraq with our tail between our legs. Contempt for our showing there increases scepticism about what we are achieving, or not achieving, in Afghanistan."

Hastings, hedging his bets, writes: "It would be good to be able to dismiss the doubts and criticisms … Yet most touch a nerve." Readers of this blog will know that we have come to the same conclusion. Our "take" most definitely accords with the "perceptions" he records. He suggests we must keep trying in Afghanistan, not least to demonstrate our support for the US. I would agree.

But mere "trying" is not enough. We must succeed, and we have a lot of ground to make up.