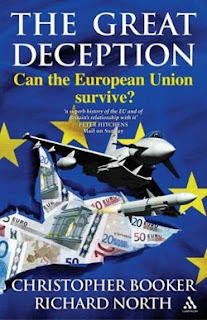 "Some conspiracy theories are true – and the worst of them all is the European Union." Thus writes James Delingpole in his Daily Telegraph blog.

Delingpole then goes on to refer to "the best, most comprehensive account ever written on the EU", naming The Great Deception by Christopher Booker and Richard North.

Our arguments are then summarised in the piece Delingpole writes, extracted from his own book, How to be right, delightfully sub-titled, "The Essential Guide to Making Lefty Liberals History. The extract concludes with these observations:

What's extraordinary in an age of conspiracy theories is that the greatest modern conspiracy of them all – and one that happens to be true to boot – has been so pointedly ignored by so many for so long. It's significant that the only serious and thorough investigation there has ever been on the subject – The Great Deception – went unreviewed in every national newspaper.

The European Union has been the single greatest political disaster since the Second World War. This is rather a large and terrifying mistake for anyone to admit to having made. Perhaps too large. No wonder we're all so determined to avoid the issue. If only we can all ignore it for long enough, seems to be the thinking, maybe it will magically disappear. It won't.

He is dead right about the book being unreviewed, even by Booker's own newspaper. Two years of incredibly hard graft went into that book and the media ignored it, as did many others. That still rankles.

Delingpole is also right about the EU being the single greatest political disaster since the Second World War. Yet what is so maddeningly frustrating is that there are so many people out there who, having ignored the book, also think they can ignore the EU in the hope that it will go away. But that final sentiment is right again. It won't magically disappear. It will destroy us, unless we destroy it first.