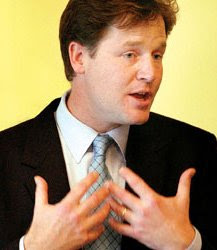 There is certainly a degree of schaudenfraud to be enjoyed from watching the smug little Nicky Clegg squirm as The Daily Telegraph outs him.

No wonder he was squealing yesterday about sticking together with "Europe". He may need the bolt-hole when his grubby little party finally ditches him for a newer model.

But the pleasure somewhat palls when we see that anti-democratic slime Denis MacShane write in The Daily Telegraph that, "The BNP must not prosper from this scandal". Frankly, if MacShane tells us not to vote for the BNP, I cannot think of a better reason for voting for them.

It gets no better, though, reading Daniel Finkelstein writing in The Times who tells us that "the expenses fiasco has shown why Parliament must change its ways."

It starts off as a promising piece, the theme following the label on the tin, with a list of reforms needed to improve parliament. But, as it grinds on, we see that one of Finkelstein's proposed improvements is a "smaller legislative programme." MPs, he writes …

… have long been aware that they are passing too many laws to be able to scrutinise them properly. They even passed a special Act to allow existing laws to be changed without having to go back before Parliament at all. The public is not aware of this. Most think laws still have to go through Parliament … How long before these arrangements to make laws by shortcut become a scandal?

With MPs earlier complaining that they did not have enough work to do, and with the thinnest legislative programme in recent history, one wonders which planet this man inhabits. He is either so monumentally stupid that he has no idea what is going on, or he is so arrogant that he believes his readers to be as stupid as he appears to be.

The point, of course, is that since most legislation is made in Brussels and implemented either via EU regulations – whence it comes nowhere near Parliament – or is enacted via statutory instruments, this venerable institution has become largely redundant.

Thus it is that the "expenses fiasco" is but a symptom of the greater malaise. When Parliament has lost much of its purpose, it is inevitable that one consequence should be that its members internalise, and focus on self-enrichment. That leaves Parliament weaker, but the rot started long ago, with our membership of the EU fatally weakening the institution.

Nothing we are seeing, however, in any way strengthens Parliament. Barricading MPs behind palisades of rules and regulations to control their peculant tendencies does nothing to improve their authority or power.

Here, the issue is that, love them or loathe them, MPs are our representatives. Parliament is there, in part, to protect us from an over-weaning executive and to safeguard our liberties. A weak Parliament weakens us all. And, if the effect of this current fiasco is to leave Parliament still weaker, one wonders in whose interest that might be.