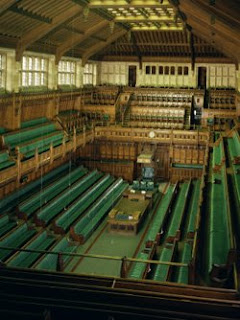 Not for the first time, Charles Moore has put his finger on the spot. Writing in The Daily Telegraph, the headline and strap – accurately reflecting the text of his column – which exactly articulates our views: "The House of Commons is ours, not theirs. Don't ruin it, reclaim it … Our thirst for revenge over the expenses scandal is understandable but there is an alternative."

Writes Moore, "We must save the House of Commons. I never thought that, in writing such a sentence, I would be swimming against the tide of British public opinion, but people are so angry about the revelations of MPs' expenses that they seem not to care what happens to the entire institution."

There is no need to reinvent the wheel by reproducing Moore's commentary here, but he makes precisely the point we made a few days ago, when we wrote:

Here, the issue is that, love them or loathe them, MPs are our representatives. Parliament is there, in part, to protect us from an over-weaning executive and to safeguard our liberties. A weak Parliament weakens us all. And, if the effect of this current fiasco is to leave Parliament still weaker, one wonders in whose interest that might be.

Nothing the torrent of coverage in the past days, led by The Daily Telegraph, has served to strengthen Parliament and many of the proposals for "reforms" will not in any way improve the situation. And while the claque - always easily pleased – rushes in to applaud Mr Cameron for his "leadership", what he proposes is essentially a statist solution which does nothing at all to reinforce the primacy of Parliament.

In fact – as one might expect – he is simply reacting to events, his measure in part being damage limitation and in part an attempt to make political capital out of the situation. But his response has been of a party leader – which he is – not that of a parliamentarian. Thus, the "Cameron way" – as outlined by Moore …

… is to decide that MPs have been so despicable that they need to come under greater control. Some external authority – as yet undefined – will watch over them. They will work exclusively as MPs. If they are housed at our expense, it will be in barracks, with prefects to make sure they are all in bed by lights-out at 10.30. There will be regular inspections of the contents of their boots. The logic is that if you cannot trust MPs, you cannot allow them to have much power. So parliamentary government collapses.

This is the wrong move. As a party leader, soon to become prime minister, Cameron has a vested interest in fostering a weak, compliant parliament. Its job will be – as it is now – to constrain the executive, which he will lead. In strict terms, parliament is the "enemy" of the government, as indeed governments are the enemy of the people. We should tolerate them only because the alternative – of not having a government – is far worse.

But, at every point, it is governments – not parliaments – which should be bound, hamstrung and constrained by rules which limit their freedom of action, their powers and their reach. What the Telegraph and the media is doing is turning Parliament - our Parliament, into the enemy, while the claque rush gleefully into the trap, and rejoice at the prospect of a Parliament in chains, not realising that those chains will be their chains.

Thus, the task, as Moore avers, is to reclaim parliament, to rehabilitate and to strengthen it. The baying of the crowd has never been a rational guide for action, and it is not now. Citing Edmund Burke, writing about the French Revolution, Moore quotes him saying, "Rage and frenzy will pull down more in half an hour than prudence, deliberation and foresight can build up in a hundred years." It remains, writes Moore, a useful warning.

Putting it more prosaically, we are in danger of throwing the baby out with the bath water. And, in this, one needs to remember that The Daily Telegraph is a commercial operation – its primary concern is to sell newspapers. That it has achieved, spectacularly. But, despite its protestations, that does not mean it is a friend of democracy.