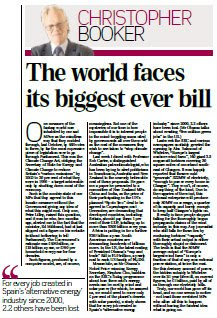 Two examples of why our MPs are so important to us and why, therefore, this furore of their "allowances" misses the point, are offered today by Booker today in his column.

The first relates to "climate change" and, writes Booker, a measure of the fantasy world now inhabited by our sad MPs was the mindless way that they nodded through, last October, by 463 votes to three, by far the most expensive piece of legislation ever to go through Parliament.

This was the Climate Change Act, obliging the Secretary of State for Energy and Climate Change to reduce Britain's "carbon emissions" by 2050 to 20 per cent of what they were in 1990 – a target achievable only by shutting down most of the economy.

Given a vibrant House, where MPs actually used their brains – those that have them – and the extremely generous staff and office allowances, and they would have thrown the Bill out, accompanied by hoots of derision at the government in presenting it to them.

As we shiver our way through May and another cold Bank Holiday weekend (here, at least) the one way to get a laugh is to complain about "global warming". Ordinary people can see that the scare is a scam, and a growing number of reputable scientists and thinkers – as Booker recounts in his piece – are coming to the same conclusion.

But, Booker notes, such is the zombie state of our MPs that they not only agreed to this lunatic measure, they did so without the government giving any idea of what this might cost. Of all the gilded, over-paid MPs present in the debate, only one, Peter Lilley, actually raised the question of costs – and no answer was given.

However, the same Peter Lilley last month, alerted us to the fact that the minister, Ed Miliband had at last slipped out a figure on his website. It is a measure of the contempt this government has for parliament, and the docility of MPs, that he did not even bother to tell parliament – not that it would have made any difference if he had.

But, while we fret about the costs of our MPs and their cavalier attitude to taxpayers' money, the costs of all our MPs salaries and perks amounts to perhaps £4 per household per year. Yet the government's estimate for the costs of its lunatic Climate Change Act was £404 billion, amounting to £18 billion a year, or £760 per household every year for four decades.

The second of Booker's examples relates back to October 2006 when, under the heading "Our troops will patrol in 'coffins on wheels'", he reported on the Ministry of Defence’s plan to deploy 189 Pinzgauer Vectors in Afghanistan. These were to replace Snatch Land Rovers, which had proved horribly vulnerable to roadside bombs.

The Vectors, Booker explained to his readers, were even more fragile. But, after five British soldiers died recently in this way, the MoD admitted that Vectors had been withdrawn because they were "vulnerable" to roadside bombs – to be replaced with a version of the Snatch Land Rover.

He thus concludes, "If I could predict this before it happened, where, pray, were those MPs on the Commons defence committee whom we pay to pre-empt such outrageous blunders?"

At two levels, therefore, we have specific failures of MPs to do their jobs – on the one hand saving us huge amounts of money and, on the other, saving lives, as well as money. Expenditure to date of the Vector programme has been nearly £50 million of the near-£100 million allocated.

The worst of it all, as Booker points out in another piece, is that MPs were not at all slow in using parliament to their own advantage when they voted in tax exemption for their own allowances.

This, incidentally, is the same House of Commons that insisted the Queen should pay income tax, thus craftily adding a whole new dimension to the nest-feathering of our political class.

Interestingly, Geoffrey Wheatcroft in The Guardian yesterday, makes a related point about our MPs. There is, he writes, a connection between the torrent of money for second (or third) homes and all the other allowances and the fact that parliament has never been more inert in relation to the executive. Without consciously realising it at first, MPs have been bought off, and become ciphers.

As we remarked, the government has been stuffing their mouths with gold and, so full are they now, our MPs have forgotten how to speak on our behalf.

It is their peculatory habits rather than their surrender, however, that has done for them. The Sunday Times suggests that 325 MPs – more than half – will be swept away at the next election, "as voters take revenge on politicians". The damage though has already been done, and the "revenge" will hardly be that sweet when the retirees make off with their severance packages and their diamond-studded pensions.

We, as always, will have to foot the bill and some will not even be alive to do that. What a mess they have made of it all.