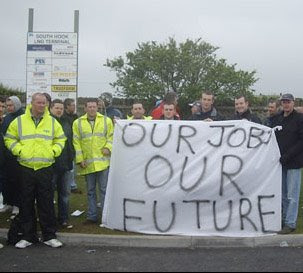 It cropped up big time in February and grumbled on for a while, culminating in an absurd statement from Mandelson – and then seemed to go away. Now, the situation unresolved, it is back with us.

This is, of course, about the "British jobs for British workers" row, which has re-ignited, with thousands of contract workers at oil and gas plants in England and Wales staging unofficial strikes in protest over the use of foreign labour.

The dispute initially affected sites in Pembrokeshire, the Vale of Glamorgan, North Lincolnshire and Cheshire, where workers claim agreements on the employment of local labour have been broken. Then it spread to the liquefied natural gas terminal in Milford Haven, Pembrokeshire, where workers accused management of breaching an agreement to employ British staff at the South Hook site.

Latterly, workers at that site are claiming a victory and, if it is a victory, it has been achieved in defiance of UK "secondary picketing" laws, as other workers surged onto the site to offer their support, and without the intervention of either government or parliament.

Few will make the link between this and the current "expenses" furore at Westminster, but there is one obvious point to make. While industrial managers outsource jobs to foreign workers, British workers suffer – either by losing their jobs or by being forced to take lower wages. When "British workers" in Westminster outsource their jobs – to foreign workers in Brussels – they are rewarded with substantial pay rises.

As significantly, while the media have been obsessed with peculatory MPs, comment on this issue has not come from parliament but from our government across the water, in the form of the EU commission's employment spokeswoman Katharina Von Schnurbein.

Says the fair lady, the free movement of labour and services within Europe should not jeopardised. "We think that free movement of workers benefits both the workers and the host country. Certainly closing borders doesn't create any jobs," she says.

That claim is arguable, and whether the UK actually benefits overall from the free movement of labour is debatable. But the point is not being debated – at least by our own parliament in any meaningful way. Nor can it be, as there is absolutely nothing MPs can do about the situation. The principle of free movement is locked into EU law, over which MPs have no control.

Arguably, if we were a self-governing nation, there might be something that parliament could do, by way of demanding action from government, but since our provincial government is also bound by EU law, there is no point in parliament even raising the issue. Instead, as it did yesterday, it spends its time discussing its own expenses – while the workers take the law into their own hands.

There is the broader lesson of the two apparently disparate issues. As parliament shows itself to be increasingly irrelevant to the concerns of ordinary people, it focuses more and more on its own affairs and preoccupations while, out in the real world, the rule of law breaks down.

This in a small way points to our future. Nature abhors a vacuum. When parliament gives up its powers, others move in the fill that vacuum and exercise power on their own behalf. Strangely though, that lesson will be lost on all but a very few MPs, while the rest conspire to destroy what residual powers may remain, paving the way for the final breakdown of our society.